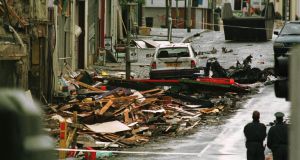 Amnesty said an investigation was needed ‘to ensure lessons are learnt, included from the failure to carry out adequate investigations’ into the Omagh bombing. Photograph: Frank Miller/The Irish Times.

Its statement comes after prosecutors in the North on Tuesday dropped all charges against the only remaining suspect Seamus Daly in connection with the 1998 Omagh bomb in which 29 people died.

Amnesty said an investigation was needed “to ensure lessons are learnt, included from the failure to carry out adequate investigations into the bombing”.

In September 2013, the Northern Secretary Theresa Villiers ruled out the possibility of holding a public inquiry into the bombing.

“The collapse of this case means that the families bereaved and those injured by the bomb are left without answers about what happened that day and whether it could have been prevented.

“The failure of the State to deliver justice through the criminal courts only reinforces the case for an inquiry to help deliver truth.

“The Secretary of State must now revisit her indefensible decision to refuse an inquiry into the Omagh bombing.

“The families have been drip-fed information over the years, with new wounds opened each time and with none of the alleged bombers ever being held criminally responsible.

“What the bereaved, and Northern Ireland more broadly, deserve is the fullest account possible of what happened in Omagh, delivered by an independent inquiry, with cooperation from all sides.

“All that families want is the truth. Surely that is not too much to ask?”

Amnesty is also calling on the Irish and United States governments to offer full cooperation with the work of such an inquiry.

A victims’ campaigner has said he agreed with the decision to drop the Omagh bomb trial. Michael Gallagher’s son, Aiden, was one of 29 people killed in the 1998 blast.

Mr Gallagher said: “This was a difficult case and hinged on the testimony of one individual and that one individual did not seem to be up to meeting the test needed to put someone behind bars.

“For that reason I agree with the decision, regrettably, that happened today.

“There was no other option for the Public Prosecution Service or the judge but to deliver the verdict that we have just heard.”

Mr Gallagher has been the most prominent of those campaigning for justice for Omagh.

He has said his son, who was 21, remains in his thoughts every day, and has met ministers in Dublin, London and Belfast as part of a campaign for a public inquiry into one of the worst atrocities of the Troubles.

Mr Gallagher said it was obvious listening to prosecution star witness Denis O’Connor, a builder from Kilkenny in the Irish Republic who claimed he received a call from Seamus Daly around 20 minutes after the bomb detonated on August 15 1998, that the case was going nowhere.

“I think it should have been obvious a lot earlier than that.”

He said he was trying to contain his anger and channel it positively into seeking the truth.

“We need some answers, we need to know what went so drastically wrong 18 years on — conviction after conviction has failed in Omagh and yet there is so much knowledge about Omagh.”

He added: “If there is any decency in society, in the people that manage our state, they need to work together to get the truth to the families of what happened.” He said most families had given up on achieving justice.

Here is a list of the 29 people who died in the Omagh bombing:

Avril Monaghan, 30, Augher, Co Tyrone (who was pregnant with twins).