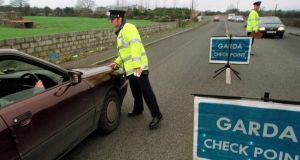 The Garda said a new IT system already installed should ensure the issuing of summonses to motorists who had already paid fines should cease. Photograph: Joe O’Shaughnessy.

The State is facing a bill of tens of millions of euro after it was revealed 14,700 people had been convicted of motoring offences by the courts in error.

The mistakes arose when motorists who had paid a fine under the fixed charge notice (FCN) system were mistakenly sent summonses to appear before court.

In each of the cases they were convicted and a sanction, including a fine, was imposed.

However, because they had paid a fine on receipt of their FCN for motoring offences the matter should have concluded at that juncture. They should never have been summonsed.

A total of 146,865 summonses had been sent out in error in that way since the fixed charge notice system began in 2006.

However, gardaí believe it is only those cases where the motorists were convicted and sanctioned by a court that action must now be taken.

The Garda plans to contact all of the people involved and make arrangements to have all of the cases brought back before the courts to set aside the convictions.

It must pay the legal and administrative costs involved and may also be sued by some. Motorists who, for example, saw increases in their insurance premium or lost their jobs could take legal action.

Assistant Commissioner Michael Finn, who is in charge of roads policing, said the Courts Service, DPP and the State Claims Agency had been consulted.

“I apologise to all of these people who were brought before the courts,” he said.

The revelations emerged on the same day the Garda was also forced to admit two million breath tests had been record on its PULSE database by gardaí despite only one million tests having been carried out, between 2012 and 2016.

A spokesman for Tánaiste and Minister for Justice Frances Fitzgerald said she was concerned about the findings. She had asked to be “kept informed of progress in this regard and in relation to ensuring issues of this kind do not arise again”.

The Garda said a new IT system already installed should ensure the issuing of summonses to motorists who had already paid fines should cease. And in relation to the breath testing problems, gardaí were now required to record the serial number of the device they are using for tests.

Mr Finn said the Garda believed the data for last year and to date in 2017 was accurate.

Labour Party leader Brendan Howlin said what was revealed by the Garda “strikes at the core of public confidence” in the force.

The problem with the fixed charge notice system came to light last April when a motorist who had paid a fine for failure to display an NCT certificate was summonsed to court.

On learning the detail of that case the Garda reviewed data for that offence and found 1,130 similar cases.

And when all offences under the fixed charge notice system were examined, it was revealed also 147,000 motorists had been summonses to court despite having paid an initial fine which should have brought an end to their case.

The offences involved include non display of NCT certificate, insurance disc or tax disc, speeding, using a mobile phone when driving and a rage of others. Non display of a tax disc accounted for 68,664 of the cases.