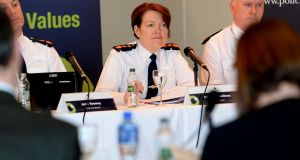 An Garda Síochána has been forced into an unprecedented admission that the number of breath tests it claimed to have carried out to catch those drink driving was grossly exaggerated for years.

In the period 2012 to 2016, Garda records claimed two million breath tests were carried out. However, it has now emerged the real number of breath tests carried out was just over one million.

The force was under significant pressure during the period to target drink driving and reduce road fatalities.

Asked whether the figures had been deliberately inflated, Assistant Commissioner Michael Finn, who is in charge or roads policing across the Garda, said: “The figures don’t add up. Certainly (gardaí) weren’t recording them correctly.”

The Policing Authority said the discovery raised “serious questions of integrity” for the Garda and “raises a widespread concern in the way Gardaí go about their daily work”.

It added: “In the view of the authority, the scale of the discrepancy is further evidence of deep cultural problems within the Garda service – a culture in which such behaviour was possible.”

The authority had raised its concerns with Garda Commissioner Noirin O’Sullivan last month and had also expressed its disappointment at not being informed an audit was underway.

The accurate data pointing to the recording of one million “ghost” breath tests came to light from the Medical Bureau of Road Safety, which calibrates testing devices from the Garda.

The bureau constantly recalibrates each testing device every six months and when it does so it notes the number of tests carried out on that device since it was last recalibrated.

Over a year ago the Garda withdrew from its website its data for the number of tests carried out in recent years.

Mr Finn said the force was not sufficiently satisfied with its revised data to publish it yet. It had also decided, for now, not to publish figures for breath testing currently being carried out and would not do so until the end of this year.

Mr Finn said there were over 1,200 breath testing devices used around the State and that the number of tests performed had not been noted when the devices were in use. Instead, gardaí later entered the number of tests carried out onto a record on the PULSE computer database.

Mr Finn denied the Garda was only revealing the size of the problem now because it had been highlighted by a report in The Irish Times last month.

Within days of that report, chair of the Policing Authority Josephine Feehily raised the matter with Commissioner O’Sullivan and her team at a public meeting.

She revealed the Garda had never told the authority an audit into the discrepancy in the figures was underway and that the authority members first heard about it in The Irish Times report.

The Garda held a media briefing Thursday to outline the findings if that audit and release other information about serious problems identified with other areas of roads policing.