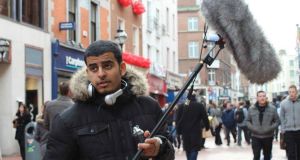 A file image of Ibrahim Halawa (21) who has been in jail in Egypt since being arrested in Cairo in August 2013. His trial was further adjourned on Wednesday.

Judges at the trial of Ibrahim Halawa have ordered a further medical examination of the Irish man amid concerns about his health after more than three years in jail in Egypt.

The move came at the latest hearing in a trial that has been beset by delays and adjournments. A number of witnesses were called and cross-examined on Wednesday, and the judges received petitions on behalf of some defendants.

Before adjourning the trial for the 20th time, the three-judge court ordered further medical examinations of Mr Halawa. The 21-year-old’s sister, Somaia, had said in recent days that he was on hunger strike and suffering from a skin disease she linked to an “inhuman prison hospital” at which he was being held.

These concerns had prompted a Government decision on Tuesday to ask the Chief Medical Officer to nominate an independent medical expert who would be given access to Mr Halawa. A Government spokesman said the Egyptian authorities usually granted requests made by the Irish authorities, who have made 55 consular visits to Mr Halawa since his arrest in August 2013.

Commenting on the latest adjournment, Minister for Foreign Affairs Charlie Flanagan said he was “disappointed and frustrated” and that Mr Halawa’s continued incarceration was “a source of great concern” to the Government. He said he had been briefed on the hearing by Ireland’s ambassador to Egypt, Damien Cole, who was in court.

“The lack of clarity around Ibrahim’s health continues to be a serious source of concern. Following a Government review of the case earlier this week, officials are engaging with the Egyptian authorities to seek urgent clarification of our citizen’s medical condition and to secure assurances in relation to his access to appropriate treatment,” Mr Flanagan said.

He said he was concerned at persistent reports that Mr Halawa was on hunger strike and urged him to protect his health “in every possible way”, adding: “I also urge all parties who are in contact with him or who have influence with him to dissuade him from any actions that would be detrimental to his health.”

The mass trial of 494 defendants appeared to be making some progress in January, when at one hearing 10 witnesses were called to give evidence. The witnesses, including nine police officers, gave evidence relating to clashes at Ramses Square and the Al Fateh mosque, where Mr Halawa and three of his sisters were arrested on August 16th, 2013.

Lawyers for the 494 defendants were allowed to cross-examine the witnesses, and Mr Halawa’s lawyer questioned the police officers on a number of general points. Mr Halawa was not mentioned by any of the witnesses, it is understood.

A number of the police officers were asked in court if they could identify any protesters from Ramses Square that day, but it is understood that in nearly all cases the officers said they could not.

One officer identified a defendant whose name appears in a technical review of video evidence previously presented to the court. A civilian whose brother was killed on Ramses Square also gave evidence.

A copy of the seven-page technical review, which has been seen by The Irish Times, states that a team of three specialists was tasked by the court with examining 261 video clips of “riots and violent events” at a number of locations in Cairo around the time of the alleged offences.

The report’s authors used photographs of 330 of the accused men and attempted to identify them in the video images. However, according to the report, only two of the accused were identified.

“We were not able to confirm the suspicions [against] the other accused among the large crowd of people appearing in the video recordings and the digital images contained in the exhibits,” it states.

The report makes no reference to Mr Halawa. The trial is due to resume on April 5th.