Test case was due to be heard in February 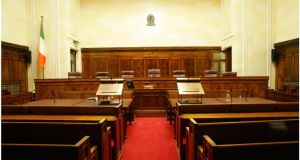 An African family whose legal challenge to the controversial direct provision system for asylum seekers was due to be heard next year has unexpectedly withdrawn its case.

The root-and-branch challenge was the first of its kind and was seen as a test case on the legal validity of direct provision, the system of housing and allowances for asylum seekers. The family of five had argued the scheme was unlawfully established and had no legal basis, as it operated by ministerial circulars and administrative arrangements without any statutory underpinning.

At the High Court yesterday, however, counsel for the family told Mr Justice Paul McDermott the case was being withdrawn on foot of papers received from the State last week and, arising from that, further instructions from the family.

In October, Mr Justice Colm Mac Eochaidh granted the family leave to take the challenge and the case was schedule for hearing in February. A further two cases taken by asylum seekers on broadly similar grounds remain in the High Court list but have not been allocated hearing dates.

Some 4,650 people are in the direct provision system, where they are given accommodation, meals and €19.10 per week while they wait for their application for asylum to be heard. They are not allowed to work or claim welfare benefits while in the system, where the average length of time spent is almost four years.

A spokesman for the Department of Justice said that as no substantial reason for the withdrawal of the case was given by counsel for the family, the State was not in a position to offer any further comment.

It is understood the withdrawal took the State by surprise, as it believed affidavits and statements of opposition supplied to the family last week contained no information the family did not already have.

Established in 2000, direct provision has been widely criticised by campaigners for providing cramped and in some cases sub-standard accommodation. Of the 34 centres that provide accommodation - which include former hotels, hostels, a caravan park and a leisure centre - seven are owned by the State and the rest are run by private operators.

In the Dáil in October, Minister for Justice Alan Shatter noted the High Court challenge was due to be heard next year but said he could not say anything that would pre-empt the State’s response in court.

In the context of legal challenges generally, however, he said it was worth noting that a substantial number of those residing for long periods in direct provision were individuals who had gone to the courts to challenge refusals of their applications for asylum and/or permission to remain the State. He said there were about 1,000 such cases pending before the courts.

Mr Shatter admitted direct provision had “many faults” but said he had yet to see any proposals, “or at any rate proposals grounded in the reality of the economic conditions we face”, as to what could replace it without “re-creating the crisis which led to its establishment in the first place.”