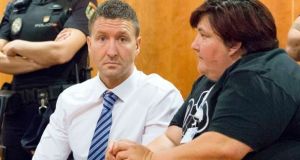 Dubliner James Quinn (35), pictured with a translator, in a court in Malaga where he is on trial for the murder of Gary Hutch. Photograph: Solarpix.

The jury has started considering its verdict in the trial of a Dublin man who is accused of killing Gary Hutch in Spain three years ago.

James Quinn (35), who state prosecutors claim pulled the trigger or drove the stolen getaway car, insisted in a final address to the court that he had nothing to do with the September 24th, 2015 killing, which sparked a deadly feud between the Kinahan and Hutch gangs.

“I was never in the car, I was never at the apartment and I didn’t have anything to do with the murder,” he told the court in Malaga.

Mr Quinn was offered the opportunity to protest his innocence after three days of evidence and lawyers’ closing speeches before the five women and four men of the jury were sent out on Thursday afternoon. If found guilty, he would face a life sentence.

The jurors, who were taken to a hotel for the deliberations, were told to return to court on Friday to update the judge on their progress.

State prosecutor Jose Barba acknowledged in court on Wednesday that Mr Quinn could have been the getaway driver rather than the person who shot Mr Hutch next to a swimming pool outside his home in Miraflores near Fuengirola.

Mr Barba offered the court an alternative ‘B’ indictment to be considered alongside the theory that Mr Quinn was the person who shot Mr Hutch.

In his closing speech on Thursday, Mr Barba said he was convinced that Mr Quinn, a father of one, had personally killed Mr Hutch and insisted it had been demonstrated in court.

However, he also told the jury he was also offering them the option of convicting Mr Quinn on the same charge of murder but ruling that the accused was the driver and lookout who helped make the execution happen. He said they did not have to acquit him if they had doubts as to the identity of the gunman.

Referring to a baseball cap carrying the Irishman’s DNA that was recovered from a BMW X3 Mr Hutch’s killers tried to burn out near the murder scene, he added: “Quinn has been in prison for more than a year and a half.

“I think if he ever admitted to regretting anything it wouldn’t be the murder of Gary Hutch but the fact he didn’t destroy the now famous baseball cap which has ended up certifying his involvement in the killing...The baseball cap is crucial.”

Regarding Mr Quinn’s claims he was in bed with a hangover and a prostitute after a wedding when Mr Hutch was shot, Mr Barba asked: “Why didn’t he say it when he was arrested and questioned by police? If he had, that woman could have been brought as a witness.”

He told the jury that although there was no written contract to prove Mr Quinn was a hired assassin by the Kinahan family, there was evidence pointing to the fact he was a paid killer and murdered Mr Hutch for money on the orders of an organised crime boss.

“We don’t know exactly the motives behind the murder but the victim was the nephew of the head of the Hutch clan leader Gerry ‘the Monk’ Hutch and obviously an important figure,” he said. “You can’t bring him back to life with a guilty verdict but you can see to it justice is done.”

Mr Quinn’s defence solicitor Pedro Apalategui urged the jury to put aside the images they had seen of police giving evidence behind doors or addressing the court with balaclavas on which were not conducive to the presumption of innocence.

He said there was no proof whatsoever to back up the prosecution claim that Mr Quinn killed for cash and insisted the possibility of manipulation existed in the recovery of the baseball cap with his client’s DNA on it from the getaway car.

“The state prosecutor says the appearance of the baseball cap is crucial and you can convict the defendant on the basis of a CCTV screen grab he says shows James Quinn with the cap on inside the estate where Gary Hutch was living,” he said.

Mr Quinn has also been tried for illegal weapons possession and faces a three-year prison sentence if convicted. His defence lawyer says he is innocent of any wrongdoing and wants the jury to acquit him on the weapons and murder charges.