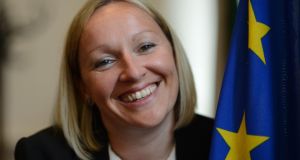 Lucinda Creighton: “The challenge for the legislature is to balance the constitutional protection for both.”

Minister of State for European Affairs Lucinda Creighton yesterday said she would be “very disappointed” if Fine Gael parliamentarians were effectively excluded from the party for refusing to support the Protection of Life During Pregnancy Bill.

“Under the legislation, there are mechanisms for the mother to vindicate her right to life, which is absolutely correct and appropriate. But there is no mechanism for the unborn child,” Ms Creighton said during a working visit to Paris. “The challenge for the legislature is to balance the constitutional protection for both.”

Balance
Ms Creighton said “a logical solution” would be for the attorney general “to have that responsibility or role, or indeed some other officer of the courts. This would give some balance to the legislation and make sure that the right of the unborn child as enshrined in the Constitution can actually be vindicated. It would make the legislation more robust.”

Such a measure would “not necessarily” mean that the attorney general would come into contact with the mother, “but could perhaps review the file”. There were “a variety of legal avenues”, she said. But “there has to be some consideration given to it as we go through the committee stage of the legislation.” Asked whether the draft legislation needed amendments, she replied, “Absolutely.”

Ms Creighton said she still had deep reservations about the suicide clause, which would allow a suicidal pregnant woman to seek an abortion. “My views haven’t changed. I think the suicide clause is quite dubious.”

The Minister of State said she “would have no difficulty” with a second referendum on abortion. “Consulting the people is never a problem. But it’s not the intention of the Government at the moment. We’ll see whether this gains momentum or not.”

Extended
She said she did not resent the way Taoiseach Enda Kenny has handled the issue. “The Taoiseach has a job to do, and it’s his intention to introduce the legislation.” She was pleased that the chief whip acceded to her request that the debate be extended until next Monday, to allow Ministers who have been busy with Ireland’s EU presidency to participate.

However, Ms Creighton had some criticism of the Taoiseach’s decision to use a three line whip (compulsory support) for legislation. “It’s not simply a matter that has sprung up on this issue. I don’t believe we should have a three line whip on every vote,” she said. “I think it’s contrary to the principles of parliamentary democracy . . .

“I always felt that our whip system is outmoded and used to excess. I would like to see a different approach. It would be good for our politics if members were able to express different opinions within reason, particularly on issues of conscience . . . People have very, very personal beliefs.

Remains of mothers and babies should be ‘returned’ to families 04:01
Government scrambles to fix vaccination and quarantine programmes 03:59
Dublin city centre mixed-use investment guiding at €950,000 02:30
Dublin warehouse portfolio sold at auction for €1.4m 02:30
The Irish Times Business Person of the Month: Steve Cutler 02:10