An eggsellent finish to a troubling chocolate story 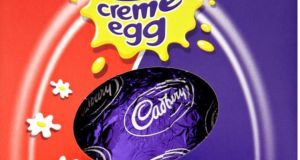 During Easter Week Liam Gavin's local Tesco in Rush, Co Dublin had a special offer on Cadbury's Crème Chocolate Egg Easter Eggs. “At just € 1.50 each, it was too good to miss, so over a few days in the run-up to Easter, I stocked up, buying somewhere between 15 and 20 eggs. I also bought a bundle of Smarties Eggs at the same price. I probably bought around 25-30 eggs in total,” he writes.

They weren’t for him. “The Easter Bunny was good to my own girls, their friends, and all the nieces, nephews and school pals, and every child (and some of the adults) calling to the house went home with one of the bargain eggs,” he writes.

On Easter Sunday there were five Crème egg and five Smarties eggs left. Gavin opened one. Disaster. “The chocolate was discoloured, with a nasty furry appearance, and it was definitely not something you would want to eat.” The Smarties eggs were fine.”

The next morning he brought the rotten eggs back to Tesco. “Receipts, of course, had been dumped in the bin outside Tesco. The people in Tesco were sympathetic, and they gave me a €10 voucher and promised to get Cadbury's to call” .

Last week the call from Cadbury’s in the UK came. “The lady I spoke to insisted that there was no manufacturing fault, and the eggs must have been stored in a hot environment. She offered to refund the cost of the eggs if I could send her a receipt. Better still, she offered to refund the cost if I rounded up all the bad eggs, and sent them back .”

Our reader was not happy with this and asked her name. “She told me her name was Maxine, but refused to give me her family name. I requested the name of her manager, and after further consultation, she told me that her name was Jane Tilt.

Liam is not impressed. "Sure, I had no receipts. Does anyone keep supermarket receipts? Tesco's voucher was fine, as far as it went, and I have no real complaint about how they handled the matter. But they never really took responsibility for the storage of the eggs in a position just inside the window of their front porch, which is probably how they got the heat damage. And the lady from Cadburys was dismissive from the word go. Her conversation was full of ‘training course’ language, empathetic phrases, ‘I’m sorry you feel that way’, “that's your prerogative”, and so on, but the bottom line is that a whole bunch of kids went home from a party in our house with nasty, inedible presents. None of the parents have phoned to complain, probably because they think I bought up a load of out of date eggs and pawned them off on their little darlings. I’m feeling embarrassed, as well as annoyed.”

He asks what has happened to the concept of thinking about the “lifetime value” of a customer ? “My-11-year old has now taken a turn against Cadburys, and she is making a point of not buying their products. She is not a chocoholic by any means, but I’d guess that in one month of not buying their products, Cadburys would lose more than a decent gesture would have cost them. If she keeps her resolve for the next, say 60 years, that will be a lot of chocs unsold by Cadburys, thanks to the attitude of the mysterious Maxine and Ms. Tilt.”

The thought of all those kids with mouldy eggs made us want to make things better so we went straight to Cadbury’s Irish arm. Within 24 hours the company arranged to have a hamper sent his way. On Friday we got this mail from him. “A courier has just dropped off a massive hamper to the house – certainly worth far more than the original eggs – and the sort of gesture that wins back any lost goodwill.” He also asked us to make a point of thanking the local staff in Tesco, “who are the nicest bunch I have ever found working in a supermarket, and Cadbury Ireland, for dealing with the issue promptly, efficiently and very generously”.

Earlier this month we were contacted by a reader who had been having trouble with eFlow for several weeks.

The problem started when he was contacted by its legal representatives in February with a request for €146 to cover unpaid toll charges. There were a number of over and backs after which it became clear the problem arose when a Laser card he used for payments had expired. He said he had contacted the company to update his details, something eFlow accepted after initially disputing it. So he thought all was well. Then he got a letter “saying he had 10 days to pay2 a lesser amount or he would have to go to court. So he contacted us after which we got in touch with eFlow.

To its credit, eFlow investigated the problem immediately and got back to us within hours with an explanation. Unfortunately, that explanation just missed our deadline for last week’s pages so we are returning to it today.

It turns out there were two accounts connected to our reader. “Upon the customer’s debit card becoming out of date and a new one being issued, the customer subsequently only updated one account, not both accounts (thereby leaving the toll charge unpaid),” eFlow said.

It said it had made “nine attempts to contact the customer about this. In addition, it’s worth noting that eFlow has a strict “return post process’ which manages any post that is undelivered and updates addresses/customer information where possible. No letters to this customer went undelivered”. It also said that following our intervention it made contact with the reader again and the matter had been resolved.

Irishman in Malta not surprised by green list change