The Pricewatch five-grand challenge: easy money that almost nobody avails of

Shopping around for insurance is one of the easiest ways to save, yet very few do it. It’s part three of the series that shows you how to save €5,000 a year. You could also win €5,000 in our related competition (see Monday’s paper) 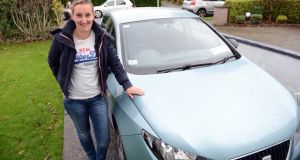 Lisa Redmond: ‘I wait until I’m in a bad mood to call the insurance company.’ Photograph: Eric Luke

Insurance is not the sexiest word in the English language, but paying attention to the bottom line when it comes to car, home and life insurance will save money for nearly everyone. A tweet we got last week illustrates the savings that can be achieved with very little effort: “Quote for house renewal insurance, €455 with long-time broker. Same insurer – Allianz – over the phone: €279. #ripoff €176 saved.”

One single phone call knocked €176 off this reader’s annual spend. And it is not an unusual story. The National Consumer Agency (NCA) has made price comparisons something of a speciality in recent years, and many of its surveys paint a similar picture.

Shop around and you will save money. As mantras go it is very dull, but that does not make it wrong. This summer the NCA focused on house insurance. It sought quotes from all the State’s leading providers based on a range of property types across the country. When all companies provided a quote for a particular profile, the average savings were €264 although some of the NCA’s admittedly fictitious consumers were able to make annual savings of more than €400 – on a single insurance policy.

With such savings so readily available, you’d imagine we would all be falling over ourselves to switch providers every year. That does not appear to be the case. According to the NCA only 37 per cent of consumers shopped around for a better deal on their home insurance last year, while only 13 per cent actually switched.

If even a third of consumers switched and got just the average saving of €264, they would collectively have saved more than €100 million in 2013 alone.

There are savings to be made when it comes to car insurance, too; if anything, these are easier to come by. While there are more switchers in the car insurance market than in other sectors, people still seem reluctant to drive a bargain, and fewer than a third of motorists routinely switch.

This loyalty to car insurance companies is particularly misplaced when you know that most of them over-quote by up to €200 in order to profit from our laziness.

Don’t let them take advantage of you. When your next renewal notice comes through the door, haggle. One reader contacted us some years ago with a trick, and it still makes sense. Every time his insurance renewal notice comes through the door, he rings his provider and says he has been shopping around and has been offered a discount of anywhere between 10 and 25 per cent on the quote they have given him.

It is a complete lie, but more often than not the company agrees to match it because they know it costs more to win new business than to retain the business they have. So just ask. You will be surprised how easily the savings come.

Last year the NCA did a motor insurance survey, and profiled eight different divers, including a 50-year-old accountant from Montenotte, Cork, who drives a 2009 Volvo S40; a 20-year-old student from Ballina, Co Mayo, who drives a 2004 Seat Ibiza; and a 42-year-old sales manager from Finglas, Dublin.

All the big insurers featured, including AIG, Allianz, Axa, Aviva and Zurich.

The cheapest comprehensive policy for the Montenotte accountant was €298 with AIG, while the dearest was Zurich’s €403.

Most companies refused to quote the 20-year-old Mayo student, but the price differential among those that did was remarkable. FBD would offer comprehensive cover for €1,362, while Liberty Insurance looked for €2,400.

Different savings could be made depending on the profile, but in every situation there were savings to be made by shopping around. Canny consumers should be able to knock at least €100 off their annual policy next year.

But shopping around is only part of the answer. There is no point in paying for comprehensive cover if the car you drive is almost ready for the scrap heap. Lowering the cover will save money.

Think about taking on excesses. Most motorists hate claiming for minor damage because they don’t want to lose their no-claims bonus. Opting for an excess of, say, €500 should see the cost of your premium fall by about €50 a year; not a huge amount but better than a slap in the face.

Check if your insurance company offers more than one type of insurance: discounts are almost standard if you take out more than one policy with the same company.

Thinking about death is something most of us avoid, but it is going to happen to us all. If you are free and single, you probably won’t have much need of life assurance, but if you have dependents or a property with a mortgage, then the story changes.

Life assurance is bought as a long-term product, unlike many other types of insurance, which are renewed every year. As a result, people tend to buy it and forget about it. This can be a big mistake.

Several years ago, a colleague bought a house, and, without thinking too much about it, took out a mortgage-protection policy with the same bank that gave her the home loan. The policy covered a €300,000 mortgage and cost her and her husband – both non-smokers in their early 30s – a hefty €109 a month.

Two years down the road, she decided to have a look around to see if she could get it cheaper elsewhere. Minutes later, the website 123.ie quoted her €639 per annum – she was paying €1,308 – and also offered her a 50 per cent discount in year one.

In the first year alone, she was able to knock €1,000 off the cost. Over the lifetime of her mortgage, the total savings will amount to €13,700. As both policies simply covered the mortgage on the house, they were identical. That’s not bad for a single phone call.

Oh, and one more thing, as Columbo might have said. Smoking is a significant issue when it comes to the pricing of life and serious-illness policies. Smokers typically pay more than twice as much as non-smokers for life cover and specified serious illness. So if you haven’t smoked for 12 months, tell your insurance company and watch your life assurance bill fall (you’ll also live longer and save yourself thousands of euro a year on the price of fags).

When you tot up the potential savings to be made on your car insurance, home and life assurance, we reckon you could easily save yourself €500 next year just by being that little bite cannier.

Lisa Redmond has become expert at negotiating with insurance companies. It started when a friend, who worked in insurance, emphasised the value of doing research and arming yourself with quotes. “I’d been ripped off for about four years, just paying whatever bill came in,” says Redmond, a special-needs assistant who lives in Sandyford, Co Dublin.

In Redmond’s experience, both car and home insurance companies tend to either push add-ons – “bells and whistles that you don’t really need” – or distance themselves from competitive quotes by claiming the policies differ.

For that reason, Redmond suggests calling your existing insurance company and pretending to be a new customer: somebody who is the same age, living in the same area and looking for the same coverage. Make sure to get the exact specs of the offer, she says, and then shop around by phone while also noting the figures quoted online.

“They always undercut themselves,” she says.“But I’ve never been given a valid reason why they try to overcharge me. They just huff and puff and say, ‘Okay, look, we’ll do you a favour.’ I’ve been saving money every year doing this. I normally wait until I’m in a bad mood to call them. That way you get it all out.” Cian Traynor

Can we help you save €5,000 a year without draining the colour from your life? We think so. Austerity has forced most consumers to reduce spending already, but many of us can cut our living costs further. In weeks one and two we showed you how to save €2,200 on your weekly shop and €800 on health insurance. This week we suggest savings of €500 on car, home and life insurance. That’s €3,500 and counting.