Teenagers out in force for St Stephen’s Day sales

Shoppers are out in force in Dublin for the sales despite the bad weather. Arnotts Dept Store opened it’s doors at 9am and the queue featured for the first time many young male customers according to Arnotts CEO Ray Hernan. Video: Bryan O’Brien 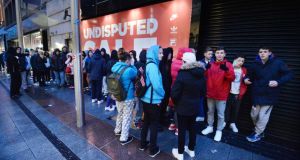 The queue outside JD Sports on Dublin’s Henry Street at 8:30am on St Stephen’s Day as sales start in many major stores. Photograph: Alan Betson/The Irish Times

A bleak December 26th this year might have persuaded any right-thinking person that venturing outside would constitute reckless behaviour.

But you have to reckon with the sales. This Stephen’s Day launched to a clamourous success, with retailer bargains drawing in the hordes.

Scenes at 11:30am on Grafton Street were manic, with crowds of tweens and teens laying claim to the city centre and taking advantage of discount offers and vouchers.

At Brown Thomas doors opened at 8am, letting in a queue of people gathering since before 7am.

The chief annual attraction in BT is the sale on bags, according to Xandy, a Dublin resident originally from China.

“We came for the Michael Kors bags,” she said. “We can get over €100 off the original price. They’re very popular so we have to come in on Stephen’s Day.”

Like Xandy, lots of faithful bargain-hunters were aware of each store’s sales niche - “Arnotts for shoes, Debenhams for makeup, and BTs for bags,” said Laura and Siobhan of Monkstown, who have arranged to meet five or six friends in town for a full day of shopping.

Debenhams, which had announced its largest sale in recent years with 50 per cent off all menswear and womenswear, was bustling, with their cosmetics section drawing a large proportion of shoppers.

Its Zara concession was a hubbub of activity, with a 30-person queue replenishing itself since the 9am opening.

According to Debenhams manager Lynsey Walsh, most shoppers on Stephen’s Day are non-nationals and young people for whom familial duty is less of a priority ahead of Christmas Day.

Department stores were more of a draw than independent shops. Dundrum’s House of Fraser offered significant discounts on coffee-machines, while Arnotts, Debenhams, Clerys, and Brown Thomas vied for domination in womenswear, accessories, cosmetics and homeware.

Electronic stores were the other chief players, with the likes of Argos offering up to a 50 per cent discount on electronics until Monday.

While those in search of refunds and exchanges were out in full force, those seeking to buy tablet computers were also plentiful.

But somewhat surprisingly, a major constituency of Stephen’s Day bargain-hunters this year was teenage boys.

On Wicklow Street for instance, a queue outside popular sneaker store Size was made up entirely of boys in their late teens jostling for the latest branded footwear.

This is a new phenomenon, according to Arnotts chief executive Ray Hernan. “We’ve never seen young guys queueing to get in before the shop opens. It’s mainly young guys coming in looking for brands they’re into and spending either money or gift cards they got for Christmas.

“The Christmas sales so far have been really strong in menswear.”

“Having nothing better to do” was the motivation for some of the boys, according to 19-year-old Fionn Fitzgibbon, who was brandishing a Topman bag, but for him the prospect of branded clothes at discounted prices was certainly the chief allure.

One can only hope this newfound interest in branded clothes in teenage boys marks the demise of the baggy boot-cut jean sported by older males.

This Stephen’s Day might herald a brighter future for retail and the Irish consumer, but without a doubt it marks one for the Irish teenage boy.