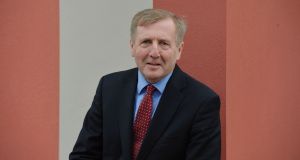 Minister for Agriculture Michael Creed has been asked to intervene in a wider industry “crisis”. Photograph: Alan Betson

Saturday night greyhound racing at Dublin’s Shelbourne Park has been cancelled following concerns a planned demonstration would lead to intimidation of dog owners and staff.

The protest follows plans by the Irish Greyhound Board (IGB) to sell the Harold’s Cross track.

Opposed to the move, the Dublin Greyhound Owners and Breeders Association (DGOBA) called for its members to withdraw their dogs and mount a picket at Shelbourne today.

It rejected any suggestion intimidation would be a feature of the demonstration.

In a statement, it said the action “reflects the frustration felt by greyhound supporters who have watched an arrogant and incompetent board run the industry into the ground”, and said the issues did not concern the Harold’s Cross sale alone.

“The board of IGB have been dishonest and totally disrespectful towards owners by undermining representative organisations and refusing to engage in any meaningful way.”

The board has debts of €21.6 million. A Government report in 2014 recommended asset disposals including the sale of Harold’s Cross, described by dog owners as the historic “Dublin man’s track”.

In a statement, Dr Brady said Saturday racing was cancelled “in the interest of animal welfare and of owners, trainers, staff and patrons”.

“Such a protest will expose owners and trainers who want their dogs to race, our patrons, our staff and our service providers to unwarranted stress, tension and possibly intimidation.”

The issue was raised in the Seanad by Labour Senator Denis Landy, a representative of the Irish GOBA. He has asked Minister for Agriculture Michael Creed to intervene in a wider industry “crisis” requiring legislation to address a number of issues.