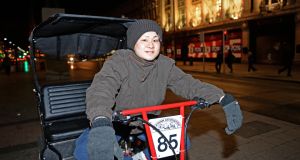 A rickshaw on O’Connell Street: the NTA sought to have the Taxi Regulation Act 2013 changed so that it could introduce regulations. Photograph: Eric Luke

Attempts to regulate the use of bicycle rickshaws on Dublin city streets have failed after the National Transport Authority said does not plan to implement new legislation.

Dublin city councillors have for years sought to restrict the use of rickshaws in the city but had been advised they could not do so without primary legislation which would bring rickshaws under the regulatory remit of the National Transport Authority (NTA) .

The NTA last year sought to have the Taxi Regulation Act 2013 changed so that it could introduce regulations for rickshaws.

Last December, an amendment to include rickshaws in the Act was passed, but the NTA has told the council the new law would not enable it to produce “robust legally defensible regulations”.

The amendment would allow the NTA to regulate the operation of “non-motorised passenger transporters” and that this covered “hackney carriage or rickshaw propelled by pedal cycle, pedal tricycle, horse, pedestrian or other such non-motorised means”.

In a letter to council chief executive Owen Keegan, the NTA said it was concerned the wording would not allow the regulation of rickshaws with an electric motor, and that most rickshaws had electric motors which provide assistance to the person pedalling.

Recent case law suggested this omission in the legislation would make it legally difficult to defend the regulations, according to the NTA.

There were also issues in relation to how the legislation interacts with local authority bylaws on hackneys drawn by horses.

“The commencement of this new legislative provision may render invalid other existing bylaws in respect of such matters as jaunting cars, horsedrawn carriages etc,” Mr Keegan told councillors .

The amendment has yet to be signed into law by Minister for Transport Shane Ross and the NTA is to advise the Department of Transport against proceeding with the amendment.