CSO says number of visits to State increased by 10 per cent to 9.58 million last year 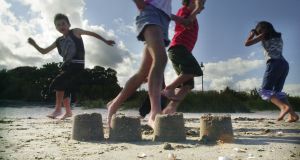 A record 9.5 million visits were made to the State from overseas last year, an increase of some 10 per cent on the previous year. Photograph: Dara Mac Dónaill

A record 9.5 million visits were made to the State from overseas last year, an increase of some 10 per cent on the previous year.

Some 9.58 million trips were recorded last year, according to the Central Statistics Office, with growing numbers visiting from North America, Britain and other European nations.

The island’s links to the TV series Game of Thrones and Star Wars film series were among the driving forces behind the growth, Tourism Ireland said.

The number of trips by North American residents rose by 19.4 per cent with 1.8 million people making the trip to Ireland.

Tourism Ireland chief executive Niall Gibbons noted that 10 per cent of all American visitors to Europe were now visiting Ireland, describing the rise in this group as “exceptional”.

Trips by residents from Britain also increased by more than 10 per cent to 3.9 million despite earlier fears over the impact of Brexit on the Irish tourism industry.

Visits by residents of other European countries were up by 8.5 per cent to 3.3 million while trips from other areas increased by 2.2 per cent.

Minister for Tourism Shane Ross welcomed the latest figures and commended the hard work of the tourism industry. However, the Minister warned of the ongoing challenges posed by Brexit and its future impact on tourism.

The figures also show a number of Irish people are making more trips abroad, with the number 6.3 per cent last year to 7.4 million.

Mr Gibbons said Tourism Ireland planned to highlight the nation’s “iconic experiences” including the Wild Atlantic Way, Ireland’s Ancient East, the Titanic Belfast and the Causeway Coastal Route, as part of its tourism strategy for 2017.

He added that Tourism Ireland would continue to capitalise on our connections with Star Wars and Game of Thrones and that the aim was to increase the State’s overseas tourism revenue from €5.4 billion to €5.7 billion this year.