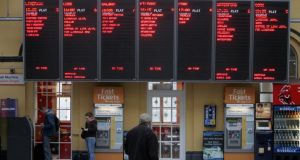 Ray Moran contacted us in connection with a fixed fine penalty notice given to his sister-in-law by Irish Rail in February. She was returning home to Thurles from Dublin towards the end of last month with a return ticket she had bought in the Tipperary station three days earlier.

“She bought the ticket on a Thursday and believed it was suitable for return on the following Sunday,” he writes. “She was never asked when she would be returning, nor advised that there were multiple types of return tickets. The ticket office, however, gave her a one-day return for a charge of €47.”

Our reader’s sister-in-law never suspected she had been given this ticket until she was going home and was issued with the fixed fine penalty notice of€100 plus €38 which was the one-way fare for the day she was travelling.

She did appeal the notice on the grounds that she believed she had been sold the ticket she had requested, but was in fact sold a different ticket without being told of its limitations.

“Any discussion on this point would have prevented all this from happening,” he says. “While Irish Rail would say it was her responsibility to check, she never saw any reason to so, because she was never aware there were multiple options,” he continues, adding that while this may seem unlikely his sister-in-law “has very rarely travelled by train”.

He also says that he has since examined the Irish Rail website to compare the various return ticket prices and the price she paid was effectively a full price for an open-return ticket – so that Irish Rail was not at any financial loss from the transaction. “If she had purchased a cheap, one-day return ticket, I could see the logic for the penalty, but that is clearly not so in this case.”

Irish Rail is not for turning, however. It has “shown no compassion in reviewing this case and applied the full letter of the law, rejecting the appeal as if my sister-in-law had jumped on the train without having paid for any ticket. I must say it is reflective of the manner in which she was humiliated on the day by the ticket collector in question, who treated her as harshly as any true fare dodger, and would not listen to any explanation or mitigation on her behalf”.

Our reader has written to Irish Rail himself in support of his sister-in-law’s appeal, but received no response other than an automated acknowledgement of receipt. “My sister-in-law can accept her part of the blame in this, but Irish Rail is not willing to show any compassion to her, who was a victim of a genuine misunderstanding for which their employee was at least partly at fault,” he writes.

He also says the “appeals process is such a hidden process with no opportunity to present your side of the case. I know she is not the first one to be treated so shabbily, but I hope if the right question can be raised, that someone else in the future will be treated in a much fairer and compassionate manner.”

In response, Irish Rail said the passenger had asked for a return ticket and “was issued with a day return”. A spokeswoman said that “by law you must have a valid ticket to travel . . . and if you do not . . . our revenue protection officers will issue a fine”.


Data security expert warns of cyber scam targeting Windows users
Cathal McDaid contacted us about a cyber scam which is targeting Irish people. “Parents of a friend of mine were contacted by somebody who said they represented ‘Windows’, and they were told they had a problem/virus on their computer. They were given a number to call back,” he writes.

Instead of calling the number, they contacted McDaid who happens to be head of data intelligence for an Irish mobile cyber security firm.”I decided to investigate myself as I had heard about something like this before and wanted to see the extent of the scam,” he writes.

“I contacted the number and found out they ask a series of questions designed to think you have a problem with your PC and to encourage you to download some software which I believe would then give them remote access to your pc/laptop. I believe this is the same scam which has been running for a while in Ireland, in fact I know others who received this call in the past.”

He says they use a number of tricks to gain a caller’s trust and he outlined some of the “techie steps” they will walk people through. At the end of the process, they wanted our reader to download legitimate software which is used for remote admin purposes.

“I suspect that once you download it and give them the details, the scammers will use it to access your PC, and from that point on they can do any number of things. At this point I stalled and simply tried to get more details out of them, rather than installing.

“I’m almost certainly not the standard person they would talk to on the call, but even though I have come across many professional cyber security threats I found this quite practiced [sic], and I believe it would cause worry for those who received it who did not have the same knowledge I have.”