Pricewatch: readers outline several complaints and the carrier responds to them 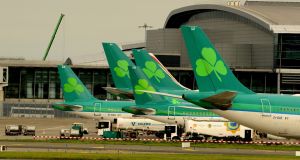 While other airlines are making headlines for all the wrong reasons of late our readers have been more concerned with the goings on at Aer Lingus. A reader by the name of Donnchadh had two separate negative experiences with Aer Lingus which prompted him to ask us for help.

He said it was snowing on the day but the pilot was explicit in telling his would-be passengers that the cancellation was due to Aer Lingus “getting the runaround from various third parties in their supply chain, like the de-icing firm. And then they reached the end of their legal flying time so couldn’t fly us,” says our reader.

So Donnchadh stayed overnight with a friend in London – saving Aer Lingus money in the process. But when he contacted the airline looking for compensation for his lost day, the claim was completely ignored.

Fast forward to May and our reader went to London Heathrow on a Friday with the aim of returning to Dublin on the 1.30pm flight the following day to make the most of the good weather that had been forecast. The Saturday flight taxied but didn’t take off “due to some technical issue”.

He says the plane and all its passengers sat on the runway until 4pm when “they announced it was cancelled.” He says that by that point he, along with many others, had been waiting with their fingers poised over the Aer Lingus app “sensing what was happening”.

He was quick out of the app trap and booked himself a seat on the next available flight “to ensure I’d actually get home. I got on a 7.10pm flight – home at 9.30pm – day wasted. I’m now on the phone seeking my refund and compensation and was refunded the original flight rather than the more expensive one I had to buy – difference about €60. This is because I didn’t follow some procedure or others of theirs.”

He says the reason he chose to look after himself and book on the app as opposed to with the airline in the airport is “because I wanted to get home and not have to queue and be given whatever I’d be given by what I assumed would be an understaffed helpdesk with over 100 angry people clamouring at it and because on my most recent experience with them when people went up to the desk in Gatwick to get their new flights and refunds etc, the Menzies customer service girl took one look at the crowd, shut up shop and fled. So everyone had to look after themselves anyway!”

He says the “nice guy on customer service” apologised profusely, saying he “fully understands where I’m coming from, but telling me I won’t get a difference in the refund (for something not my fault) and his supervisor won’t speak to me”.

Donnchadh also believes he is entitled to compensation. “They have given me a case number and sent it off to Guest Relations. Guest Relations has no phone number, no email address, no names of people and cannot be contacted. They give no timeframe re when they will get back. As far as I can see they do not like relating to guests.”

He says that as when he went “through that process re March 18th (and had to submit a form by post!) I expressed my deep scepticism about anything happening re my compensation and unsurprisingly I have heard nothing from them in relation to that claim – not even an acknowledgement.”

Next up was Aoife. “An Aer Lingus flight I was booked on from Lanzarote to Dublin in March was cancelled after we boarded due to a technical fault with the plane,” she writes. “We disembarked and eventually were told we would spend the night in Lanzarote and be on a flight the following evening. I’m a chef on an hourly rate and lost a day’s work and pay as a result of the cancellation.”

She was glad to discover EU Regulation 261/2004 which provides compensation for passengers subject to delays and cancellations and she contacted the airline to ask if there was a form or procedure to follow. She points out that Ryanair, for example, has a dedicated form on its website. “I heard nothing back within the 30 days during which the customer service department says it will respond.”

She says she followed up with “five courteous queries but have heard nothing back. I understand that the next course of action is to contact the aviation authority in the country of departure and tried to find relevant contact page on the Spanish ministry for transport but it was a dead end of Spanish-only websites and missing web links.”

She asks if there is another way to pursue this “or am I wasting my time? It seems that Aer Lingus simply have a policy of ignoring any correspondence related to this regulation.”

So we got in touch with the airline and a spokeswoman sent us the following statements.

In connection with the first reader, an Aer Lingus spokeswoman said the flight disruption in March was “due to freezing and snow conditions. The cancellation of his flight was due to weather which is deemed as an extraordinary circumstance and in such cases compensation does not apply”. She said that the May flight was cancelled “due to a technical issue, our Guest Relations team has made contact with [our reader] arrange compensation and refund the fare difference between the original flight and the additional Aer Lingus ticket he purchased. We apologise for the travel disruption he experienced.”

In connection with the second story, she said the Guest Relations team had now made contact with our reader “to arrange the necessary compensation for her cancelled flight”. She said storm Emma disrupted over 28,000 passengers at the start of March and thus created a backlog of guest queries. In response, Aer Lingus has hired and trained extra staff to deal with these queries and we have made considerable improvements to our online forum. We apologise for the delayed response and for the inconvenience caused.”