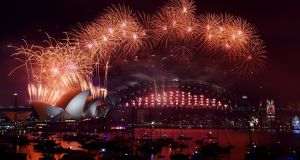 Still deciding how to ring in 2016? There are plenty of celebrations taking place around Ireland on New Year’s Eve and New Year’s Day for all ages, from bodhráns and ballrooms in Dublin to folk and blues in Cork.

The three day New Year’s Festival (NYF) in Dublin is already in full swing, with a procession of light and the world’s largest bodhrán session scheduled for New Year’s Eve.

Attendees can take part in the dazzling street procession by picking up a NYF lantern between 10.30am-6pm from the Dublin Town Kiosk on St Stephen’s Green. All donations from the lanterns will go to Focus Ireland.

People are also invited to take part in the attempt to break the record for the world’s largest bodhrán session at 6.30pm at Stephen’s Green.

The Three Countdown concert kicks off at 8pm in the 3Arena in Dublin, with performances from The Coronas, Fatboy Slim, Kila, Ryan Sheridan and Little Hours. Tickets are €34.50 and available from Ticketmaster outlets.

Musicians will also play at 15 venues across the city centre as part of the NYF music trail including performances at the Ruby Sessions in Smock Alley Theatre, and by the Dublin Gospel Choir at Christ Church Cathedral.

The Luminosity display will light up iconic buildings around the capital on New Year’s Eve, with 3D projections celebrating Irish heroes from sport, music and the arts.

In Cork, Mick Flannery and his band will perform in the Cork Opera House, while Paradox and Screenreader will take to the stage at the Crane Lane Theatre for a night of Nirvana music.

In Kilkenny, the Mobsters and Molls 1920s-themed costume party will take place in the Brewery Corner on Parliament Street, with admission free of charge.

In Dingle, Co Kerry, New Year’s Eve will be celebrated with a fireworks display from the pier. The celebrations will culminate when people gather on the Main Street to ring in the new year.

You can kick off 2016 on January 1st with a range of fitness and mental wellbeing activities as part of Resolution Day.

The New Year’s Day 5km run begins at noon in the Phoenix Park, while 120 singers from Our Lady’s Choral Society will join The Dublin Handelian Orchestra for a free outdoor performance of Handel’s Messiah at the entrance of the Hugh Lane Gallery.

A number of children’s storytelling and art workshops will be held in the banquet hall at Smock Alley on Friday, while later that evening the Flying South mental-health-themed open mic event will be held at Filmbase, showcasing a range of performers. Flying South is alcohol-free but provides a variety of teas, coffees and baked goods.

The Luminosity 3D projections will continue to light up buildings around the capital on January 1st.