Motorists in Dublin city could face fines instead of clamping 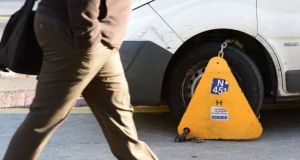 Dublin City Council Council is seeking approval for a pilot scheme to allow fixed-charge notices to be given to motorists whose vehicles are blocking bus lanes, cycle paths, clearways and access to driveways. File photograph: Alan Betson

Motorists in Dublin who commit certain parking offences such as parking on footpaths, bus lanes and cycle paths could face fines instead of the risk of having their vehicles clamped.

Dublin City Council is proposing changes to parking enforcement measures in the capital to tackle what it claims is the constant challenge of dealing with cars parked illegally in such locations as well as short-stay illegal parking.

The council is seeking approval from councillors to introduce a 12-month pilot scheme to allow fixed-charge notices to be issued to motorists whose vehicles are blocking bus lanes, cycle paths, clearways and access to driveways.

It is also proposed that such on-the-spot fines will be issued for vehicles parked on footpaths and non-commercial vehicles parked in loading bays, as well as illegally-parked coaches and buses.

The council hopes the pilot scheme can be introduced before the end of June.

The company which enforces parking controls and restrictions in Dublin city, Dublin Street Parking Services, is currently limited to the options of clamping or relocating an offending vehicle before clamping it. In rare circumstances a vehicle may also be brought to the city car pound in Harold’s Cross.

In a report to be discussed at a meeting of the council’s traffic and transport committee next week, council officials will outline how clamping vehicles parked illegally in bus and cycles lanes as well as clearways is not the preferred option as it ensures the disruption continues until the owner returns, pays a release fee of €80 and the clamp is removed.

The city’s enforcement officer, Dermot Stevenson, said the focus of parking enforcement officials was to keep the movement of people and vehicles around the city as free as possible by ensuring that vehicles were legally parked especially in relation to bus lanes, cycle lanes, clearways and access to driveways.

However, he said regular clamping was not effective in addressing situations where several vehicles are parked illegally for a short-term basis on footpaths or loading bays outside shops.

“The clamp takes a few minutes to apply and often the other vehicles in the area can be moved away by the owners without any enforcement,” Mr Stevenson said.

The council said it believed an additional form of enforcement was necessary which is why it had proposed the pilot scheme.

Colm Ryder of the Dublin Cycling Campaign, a committee member, said any measure which would improve compliance with parking rules was very welcome.

“Giving extra powers to enforce parking should help with the problem of bus and cycle lanes being blocked and reduce congestion in the city,” Mr Ryder said.

Independent councillor, Christy Burke, who chairs the traffic and transport committee, said he would support any measure that would reduce the problem of cars and vans blocking footpaths.

“It’s a real problem for wheelchair-users in parts of the city, as well as for parents with young children in prams and buggies,” said Mr Burke.

However, he added, the proposed measures would need to be studied carefully as he was not in favour of “putting extra money in the pocket of clampers”.

Mr Stevenson said the council believed the additional enforcement tool “will increase parking compliance in key areas, and lead to less obstructions and interference with pedestrians, cyclists and vehicle flows”.