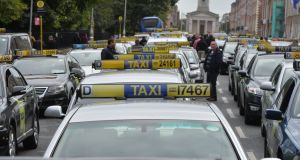 Just one per cent of drivers is aged under 30, says the National Transport Authority. Photograph: Alan Betson / The Irish Times

Should those applying for a taxi licence here undergo an English language test? Should there be an electronic navigation equipment test for applicants? Should they have to undergo a medical? And should taxi drivers, once licensed, have to adhere to a dress code?

These are among a range of questions posed by the regulatory body for taxis, the National Transport Authority, as part of a review it is conducting of licensing drivers to work in the industry.

It says that since the introduction of a knowledge test for drivers of small public service vehicles such as taxis, limousines and hackneys in 2009, the numbers of drivers licensed here has fallen by 42 per cent. And the ones who are licensed are not getting any younger. More than one fifth are in their 60s and 6 per cent are over 70. Just 1 per cent are under 30.

In preparation for the review, it looked at current regulatory practices in the taxi industry around the world including a number of European countries as well as in Australia and New Zealand. It has posted details of its findings on its website and now wants input from the public on whether the current regime for testing an applicant’s suitability to be licensed as a driver of taxis, hackneys or limousines in the Republic should be revised or remain the same. To help people come to a view it poses 17 questions to which it is seeking answers.

These range from whether there should be a specific test for applicants to drive taxis and hackeys, or should a standard driving licence, confirmation of tax clearance and Garda vetting be sufficient? It also asks whether knowledge of the geography of an area should be tested. Another question asks should a programme of continuous learning or professional development be a condition of renewing a licence. And then whether the licence when granted should be renewed every one, three or five years. And should there be a requirement on all new entrants to the industry to affiliate with a dispatch operator for a set period on entry?

The public has until the end of this month to make its views known to the National Transport Authority.