Is gluten-free healthier or just flavour of the month? 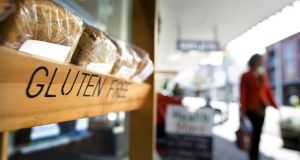 “The bread I can eat now is better than it used to be, but it will never be the same as actual bread,” says one coeliac. Photograph: iStock

The phrase “gluten-free” appeared on nine occasions in this newspaper in a five-year period from 1996 until 2000 and the same number of times over a four week spell starting at the end of March this year.

Based purely on Irish Times mentions, it’s beyond doubt the concept is very much in the public consciousness. But is that because of a heightened awareness of a major health concern affecting hundreds of thousands of Irish people or because more people are buying into a celebrity-endorsed fad, which is costing them dearly financially while delivering little in terms of health benefits?

Prof Fergus Shanahan, the chair of the department of medicine at University College Cork, certainly thinks it is a fad and he did not mince his words when talking to this newspaper about gluten-free diets last month.

“We are all susceptible to the power of mass-marketing and ultimately that is what this is. It is just a fad,” he said. “I know people might say ‘Who is this arrogant doctor to dismiss a gluten-free diet as a fad?’, but for the vast majority of people, that is exactly what it is.”

Prof Shanahan is not only the chair of medicine at UCC, he is also the director of the university’s world-renowned APC Microbiome Institute, which studies bacteria in the human gut. Science Foundation Ireland named him researcher of the year in 2013, and not long ago the Royal Irish Academy awarded him a gold medal in recognition of his achievements in the life sciences.

So Prof Shanahan knows a thing or two about how the human body reacts to food. But his pre-eminence in his field did not stop him getting it in the neck from people across multiple social-media platforms as soon as his views were aired.

“Surely most people know their own bodies and also know what foods make them feel good or bad. It’s a little patronising to claim that people are following a celebrity-endorsed fad! People have minds of their own,” said one commenter on the story when it appeared.

“Is this doctor for real? There’s massive benefits. Just look at the tennis player Novak Djokovic, ” fumed another. “When he switched to a gluten-free diet he started winning grand slams.”

The professor is not a lone voice and not the only person to arch an eyebrow at the trend. “I had a function for 100 people earlier this month and, of the 100 booked in to eat, 22 contacted us in advance to say they could not eat gluten and wanted alternatives,” he says. “Just think about it: 22 people out of 100. How is that not absolutely crazy?”

Irish people increased their spend on gluten-free food by €25 million over the past 12 months, and one in five consumers now regularly buys such products even though only 1 per cent of the population are coeliacs, according to the Bord Bia research that prompted the professor to make his comments.

The research described gluten-free food as mainstream and said the market was worth about €66 million, a jump of 36 per cent in just one year.

The research found that gluten-free is particularly popular among upper- and middle-class earners, people in Munster, couples without children and couples with adult children

The research also found that a gluten-free diet is particularly popular among upper- and middle-class earners, people in Munster, couples without children and couples with adult children.

“There is a lot of noise around the topic, whether it is from celebrity advocates such as Gwyneth Paltrow and Novak Djokovic, or chefs, nutritionists and bloggers,” said Paula Donoghue, Bord Bia’s consumer insight manager.

“Consumers have high expectations around quality, so we recommend that companies work towards positioning products and brands that are natural and taste great but just happen to be gluten-free. Bread is the barometer product for gluten-free, as fresh bread is the product they miss most.”

Donna Breen was diagnosed as a coeliac more than eight years ago so has no choice but to spend extra on food she can tolerate. She reckons it adds about €15 on to her shopping bill every week, which amounts to almost €800 a year, although tax breaks are available to people diagnosed with the condition.

She describes the changing landscape for coeliacs since her diagnosis as “dramatic”.

“There is certainly is a fad element to it. Its popularity has been really great for coeliacs but in other ways it has made things more difficult, as some people are more sceptical of the condition,” she says. “I am no expert. I’m not even an expert in coeliac disease – I just am one – but I do know people who are adopting the diet for faddy reasons.

“I used to have drive up to Sainsbury’s in Newry to fill my boot with food that I could eat back then. I don’t have to do that now. But even though things have improved, some products will never be the same. The bread I can eat now is better than it used to be, but it will never same as actual bread. Going to restaurants can be a bit hit and miss. Sometimes staff are hugely supportive and very well informed and sometimes they are completely indifferent and really don’t care.

I understand that gluten-free is a dietary trend, but it is of real benefit to those of us who are coeliac as it has widened the range dramatically in recent years

“Restaurants also charge a surcharge sometimes for serving you gluten-free products, and if a pizza cost €15 for a person who is non-coeliac, it might cost me €17,” she says.

“I understand that gluten-free is a dietary trend, for sure, but it is of real benefit to those of us who are coeliac as it has widened the range dramatically in recent years. I would be a bit concerned of what happens when the trend moves on because producers might not be so inclined to make products for the 1 per cent.

She says the things she misses most from her old diet are Tayto and Jacob’s Cream Crackers. You do get a lot of gluten-free crisps on the market now, and crackers and bread, but I’m not sure if they are ever as good.”

‘To me, it makes sense to turn down the dial on bread consumption’

It wasn’t for very long, and the experience was pretty unremarkable, but I wanted to see how it felt to go without bread and bread products for a month. I’d had a quick read of Wheat Belly, the bible for gluten-phobes everywhere, and while I thought the author was laying it on thicker than an Irish man making a doorstep sandwich, I couldn’t see the harm in removing bread from my diet for a few weeks.

We are bread-obsessed in Ireland, more so, I think, than in many other countries. Much of it is sold as a healthy product when, mostly, it’s just stodge.

The definitions of “wholemeal” and “wholegrain” are ill-understood and easily manipulated.
Salt and sugar levels are often too high.

To me, therefore, it makes sense to turn down the dial on bread consumption.

The best thing about being bread-free was the absence of that bloated feeling that occasionally takes hold.
This may be down to consuming too much bread rather than none at all, but like many others, I find it hard to resist that second slice of toast or Bakewell tart.

I also felt more energetic, although that can be a subjective measure. My month of abstinence coincided with a period when I was running very strongly and recorded a fast half-marathon time, and I don’t think this was entirely coincidental.

If anything, I saved money because I just did without. I had no need for, and therefore no interest in, gluten-free products. And because I passed on all gluten-containing products, there were no cakes and pastries on my diet. That was the hard bit.  PAUL CULLEN