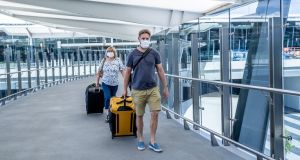 Minister for Transport Eamon Ryan has said people should “restrict travel to when it is absolutely necessary” this summer and urged people to holiday at home in the weeks ahead. Photograph: iStock

Irish holidaymakers continue to have their rights “trampled over” and people are being told to forfeit thousands of euro or “risk their own health and the health of others” by travelling overseas in the weeks ahead, a leading consumer advocate has said.

“The reality is consumers have been left in a no-man’s land and have seen their rights trampled over without any consideration for the fact that they paid in advance for trips with all that money now held by airlines and travel companies,” said Dermott Jewell of the Consumers’ Association of Ireland.

He said he had been “astounded” when the former Minister for Transport and Tourism Shane Ross “actually went against provisions that consumer groups across the world had taken years to put in place to say that vouchers were the same as refunds”.

He said the situation has now “worsened with airlines saying that if their flights are not cancelled people will not get a refund despite the fact that if people take those flights they will be doing so in direct contravention of the advice from the State’s top medical authority.”

Asked on Monday whether people should cancel their summer holidays abroad, the chief medical officer Dr Tony Holohan said public health officials would prefer if people did not travel overseas this summer. “Think about other people and the risk you might pose even if you [ IF INFECTED]recover very well, for people who are more vulnerable,” he said.

The new Minister for Transport Eamon Ryan, meanwhile, has said people should “restrict travel to when it is absolutely necessary” this summer and urged people to holiday at home in the weeks ahead.

“What we are seeing now is an absolute mockery of the rights of people,” Mr Jewell said. He said Irish authorities and officials at an EU level “are doing very little and seem exclusively focused on getting business back in business and giving consumers nothing”.

“The last Minister for Transport did very little to help consumers and we really do need to see a very different approach from the Eamon Ryan, the new minister to help citizens who have paid sometimes huge sums which is not at risk.”

He said that if the “leading health expert is saying don’t go, then people need to listen to that and if that is the case then something has to give and it can be done either legislatively or simply by the Government telling the public not to travel and telling the travel companies to treat their customers fairly.”

Meadbh Hayes is one holidaymaker who faces losing thousands of euro in the weeks ahead. “We booked our trip to Spain for July 28th to August 8th in February,” she said. “As yet, Ryanair have not cancelled our flights and having spent endless time on hold with them, they cannot update me on that flight status.”

She said she was “very nervous about travelling with children and concerned about what would happen if we fell ill in Spain? We are stuck in the position where we are being advised by the government not to take non-essential travel and yet risk losing a serious chunk of money.”

The situation is arguably more perilous for Keith Lawler. All told he and 13 family members are due to fly to Almeria next Saturday. “Our flight has not been cancelled,” he says and the group stand to lose €4,734.

The Irish Times contacted both Ryanair and Aer Lingus to see if they planned to operate an increased number of flights to and from Europe in the weeks ahead in spite of the comments from the chief medical officer.

In response an Aer Lingus spokeswoman said: “Thank you for the opportunity to provide a comment but we will decline on this occasion.” Ryanair had not respondent at the time of writing.