‘It could get very bad,’ expert tells Senate, as Biden lambasts Trump over pandemic 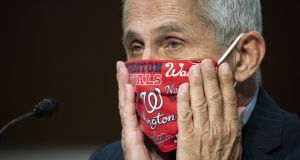 Dr Anthony Fauci: “I would not be surprised if we go up to 100,000 a day if this does not turn around,” he said. Photograph: Al Drago/Bloomberg

Infectious disease expert Dr Anthony Fauci has warned that America’s daily coronavirus cases could hit 100,000 as several states across the country continue to report a rise in infections.

“It could get very bad,” the White House coronavirus task force official said as he appeared before a Senate committee on Tuesday.

Dr Fauci was speaking as the European Union announced a plan to reopen the bloc to international travel, but included a ban on visitors from the US.

Asked by senator Elizabeth Warren if the pandemic was under control in the United States, as claimed by US president Donald Trump, Dr Fauci replied:

“I think the numbers speak for themselves . . . I’m very concerned. I’m not satisfied with what’s going on . . . clearly we are not in total control right now.”

He noted that while some parts of the country were doing well, he was very concerned about what was happening elsewhere, stating that four states – California, Texas, Arizona, Florida – were accounting for 50 per cent of all cases.

Arizona became the latest state to change its reopening plan, amid fear of a second wave. Governor Doug Ducey ordered the closure of the state’s bars, cinemas and gyms having reopened most businesses in May.

New York and New Jersey – the states worst-hit in the early phase of the pandemic – were also reconsidering their phased reopening plans even though their infection rates are down.

New York governor Andrew Cuomo said he would make a decision on the reopening of restaurants on Wednesday, while New Jersey’s governor said plans to allow higher capacity in restaurants would be postponed.

Also testifying on Tuesday, the head of the Centres for Disease Control and Prevention (CDC), Robert Redfield, criticised the announcement by American Airlines last week that it would begin running planes at full capacity, having previously unveiled measures that would have allowed for social distancing.

Mr Biden announced a range of coronavirus-related measures he would introduce if elected president in November, including hiring at least 100,000 federally-funded workers to perform contact tracing and other health tasks and providing paid leave for those unable to work due to Covid-19.

Mr Biden said he would not be holding election rallies, and would continue social distancing, following the advice of health experts, though he has visited Houston and Pennsylvania in recent weeks. He also committed to taking part in the three scheduled presidential debates with Mr Trump in September and October.

The former vice-president said that he had not undergone a coronavirus test, though members of the Secret Service stationed at his home, family members and other connections visiting his Delaware house had been tested.

Mr Trump had “squandered” the many months of lockdown that “were intended to buy us the time to get our act together”, he said. “We don’t need a cheerleader. We need a president.”