Iceberg ahead? The risks of travelling without insurance

When you consider everything that can go wrong, not taking out insurance begins to take on the appearance of high-stakes gambling 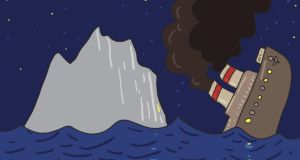 Many Irish people like an auld flutter, but forget Cheltenham or the Galway Races: the really high-stakes gamblers are in the departure halls of our airports, where as many as one in three people can be found boarding planes without having taken out travel insurance.

Back then, 32 per cent of the overall population had travel insurance of some kind, but last summer the number had fallen to 23 per cent. The VHI attributed the decline to a widespread fall in disposable income and more people deciding it wasn’t that important to pack the travel insurance along with the sun cream.


What can go wrong
This disregard is baffling when you consider all the bad things that can happen, including cancelled flights, lost bags, theft, illness, wars, earthquakes, global pandemics and tour operators going out of business. While you may be able to bear the burden of losing your bag, or of having a flight delayed – or even a holiday cancelled – the cost of falling ill while you are overseas is a much more serious matter, and the cost of going without can run to hundreds of thousands of euro and leave you bankrupt.

A person unfortunate enough to be hit with acute appendicitis in the US will be out of pocket by more than €27,000, while the most minor of heart attacks suffered there will set you back at least €35,000 – multiply that by at least 10 if your heart attack is more serious. Breaking a leg on a Swiss skiing trip will cost at least €10,000 to put right, while a fractured hip in Spain could set you back as much as €23,000, depending on the severity of the break.


The most frequent claims
According to Brighid Smyth of VHI, the most frequent claim the company sees is for cancellation or curtailment as a result of a family tragedy, or inability to travel due to an illness or injury. Just behind that are claims made after someone becomes seriously ill while abroad. If you have health insurance, it will provide some cover – but up to a ceiling of €65,000- €100,000, depending on the plan. After that, you are on your own.

“Once the medical costs go over that, the person will have to cover the costs. It doesn’t happen that often, but when it does it can be extremely costly, especially if the person is travelling to the US or Canada. If someone has no travel insurance, it could bankrupt them trying to cover medical costs to help a loved one receive the care they need,” says Smyth.

With frugality in fashion, most people are keenly aware of the wisdom of shopping around for better value. You can easily knock €30 or €40 off the annual cost of a policy without too much fuss. Sites such as Comparetravelinsuranceireland.com are there to do the donkey work for you. Remember: if you take more than two holidays a year, it is much cheaper to get a multi-trip policy.

More people are going down this route, according to Getcover.ie. The online broker says it has noticed a change in the purchasing pattern of travel insurance customers in recent months, suggesting consumers are beginning to travel more following a reduction during the downturn.

Its spokeswoman, Arlene Tierney, says that between 2011 and 2013 there was a 15 per cent swing towards single trips, “a sure sign of the times we were in – people simply could not afford to travel as much during the year, and therefore opted for single trips, as opposed to the annual multi-trip, which was a far more popular choice back in 2010.”

This trend has “significantly reversed in the past six months, with multi-trip policies seeing an 8 per cent rise in popularity, which would suggest people are travelling more than once a year again”.

If you are travelling within Europe, it is important to remember to get – and bring with you – a European Health Insurance Card. These are free, and should allow you access to public hospitals across the EU at no cost. Even if you are leaving tomorrow, apply online now at ehic.ie – if you don’t yet have the card, but have applied, the details can be faxed to your hospital of choice. It will not cover lost baggage, cancelled flights or transportation home in an air ambulance, however, so while it is good to have, it should not be considered a replacement for insurance.

TO INSURE OR NOT TO INSURE? A STRAW POLL

Do you take out insurance and is it good value for money?


Always. It’s usually less than €40 for a family of three. Well worth it. Lilian Smith


It’ll always be good value to me as I’ve claimed thousands on it. It’ll take a lot of premiums to pay what I got back. Killian Byrne


Depends where I’m going. Europe, no. Farther afield, like the US, absolutely. Thomas Kelly


Dad got very sick two days before holiday once. Insurance paid out in full. Always renew that one. Declan O’Leary


Yes if travelling to US or Asia, no in Europe. Síle Nic Chonaonaigh


Like any insurance, only good value when used. Friend’s father-in-law had a heart attack here in LA – worth it as $150,000 in bills. Noel Falkhall


I have annual insurance, renew it when going to States but would feel okay travelling in EU without it. Orla Kiely


Haven’t had it for the past few years, even to the US recently I didn’t. Colm Gannon