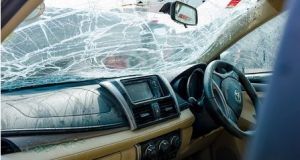 Data from Insurance Ireland gives the most reliable indication of how often firms are refusing to provide quotes, as insurance companies themselves do not provide such figures. File photograph: Getty Images

The number of motorists denied quotes by three or more insurance companies in recent years has almost quadrupled, figures from Insurance Ireland have revealed.

Under the Declined Cases Agreement drawn up in 1981, anyone denied a quote by three separate car insurance firms must be offered coverage on the fourth attempt, unless this is deemed to be contrary to public interest.

Figures released by Insurance Ireland, which administers the scheme, show there were 178 cases dealt with under this arrangement in 2012, but this rose to 308 the following year before more than doubling to 669 in 2014.

Almost 300 applicants in 2014 were dealt repeated denials due to a poor claims history, 84 had convictions and 78 had previously cancelled or failed to renew a policy.

All applicants from 2014 were eventually given a quote but it is not known how many ultimately managed to successfully negotiate coverage.

There were no fourth refusals on the basis of public interest, which generally refers to drivers with repeated convictions for road traffic offences.

The data from Insurance Ireland gives the most reliable indication of how often firms are refusing to provide quotes, as insurance companies themselves do not provide such figures.

The problem is now seen as so acute that the last government included pricing structures in its overall review of policy in the insurance sector which is expected to be completed later this year.

Insurance industry observer Simon Moynihan said he expected the number of declined cases to rise further over coming years. “The number of motorists who were refused insurance and opened a case with the Declined Cases Committee was up 117 per cent in 2014,” said Mr Moynihan, who works with insurance comparison website Bonkers.ie.

“These are huge increases, but not surprising given that insurance costs increased by more than 30 per cent in 2015 with insurance companies citing increased claims and awards,” he added. “And it’s drivers with previous claims that made up the majority of declined cases.”

Although not reflected in last year’s figures, he said young drivers were facing particular difficulty in obtaining insurance and this would contribute to more declined cases in future.

“So-called ‘uninsured’ motoring is purportedly one of the causes of high premiums, but how many vehicles are not covered by a policy?” she asked. “Surely simple cross-checking of databases, those of insurers and of the vehicle register, would answer that question and identify defaulters for prosecution.”

She also expressed the need for clarification on how claims were being dealt with by insurers. “It is only because of the existence of PIAB [Personal Injuries Assessment Board], with whom all injury cases must be registered, that we know that the total annual volume of claims is 31,576.

“We can only account for the finalisation of 9,046 between the courts and PIAB. There are 22,530 claims on which only insurers have the information on who is getting what.”