Coronavirus layoffs, stranded cruise ships and ‘the woman in Michigan’ 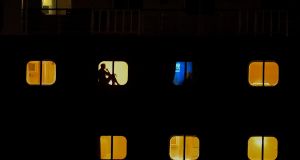 Image of the week: Stranded ships

Incredibly, there are still a number of stranded, virus-stricken cruise ships around the world desperately in search of a port that will let them dock and their passengers disembark. This ship, Zaandam, owned by Carnival’s Holland America line, has already seen four deaths on board, while almost 200 people on board have displayed symptoms. After being denied entry in several South American ports, the ship began its journey along the Panama Canal on Sunday, with symptomless passengers transferred off the coast of Panama to another ship called the Rotterdam. The hopeful destination of both ships at the time of writing was Florida, but the welcome was not shaping up to be of the “with open arms” variety.

400,000
The “conservative” estimate of job losses in the Republic given by Minister for Business Heather Humphreys. About 389,000 have already applied for the €350 a week emergency payment.

2.75 million
Number of people in the UK who will be out of work in the second quarter, according to a prediction by investment bank Nomura.

47 million
Virus-related unemployment in the US could top this number, according to an estimate by the Federal Reserve. Weekly jobless claims surged to 3.3 million last week.

Getting to know: Gretchen Whitmer

Gretchen Whitmer is the governor of Michigan, or “the woman in Michigan”, as US president Donald Trump calls her. Trump has declared he has “a big problem” with Whitmer, claiming “all she does is sit there and blame the federal government”.

Apart from being a woman, Whitmer’s main crime is that she is a Democrat. In February, she gave the party’s response to Trump’s State of the Union address; now she’s busy trying to manage the spread of Covid-19 in her state.

“I’ve asked repeatedly and respectfully for help,” she told Trump. “We need it. No more political attacks, just PPEs, ventilators, N95 masks, test kits. You said you stand with Michigan – prove it.”

China was the first to do it, but the coronavirus crisis has now forced the hasty construction of new hospitals around the world. These are some of them.

Ifema. The Madrid conference centre has been repurposed as a temporary hospital with 5,500 beds. Around about now, it should be hosting a country, rap and electronic music festival.

Excel Centre. The venue where Katie Taylor won Olympic gold in 2012 has been turned into the Nightingale Hospital London, with capacity for up to 4,000 beds.

Central Park. The green lung of Manhattan is now home to the tents of a field hospital while, in New York harbour, the USNS Comfort will take non-Covid patients. Several more temporary facilities are planned.

Messe Berlin. The army was called in to turn the exhibition centre, which should be hosting trade events, into a 1,000-bed coronavirus hospital.

Citywest. It’s not a hospital, but the west Dublin hotel, the largest in Ireland, has been turned into a self-isolation centre.

1 Majority of employees don’t want to return to pre-Covid working patterns
2 Norwegian airline sued in Dublin by inflight caterer
3 ‘I set up an investment club many years ago with a bunch of friends’
4 If tourists are such pariahs should we not be testing them on arrival?
5 Cigarette sales, Leo to meet the banks, and Arclight’s €20m payout
6 Investors in Irish solar energy fund in line for €20m payout
7 ‘My rent here is so low it’s a joke’
8 Tobacco giant’s menthol-ban substitutes take 5% share of Irish market
9 Homeworking is depriving me of juicy gossip
10 Varadkar and Donohoe to meet banks to discuss mortgage breaks
Real news has value SUBSCRIBE