A new private vault has opened – or shut, actually – in Dublin. Its owners say it’s heistproof 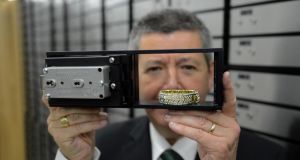 If a private security vault that opened for business in Dublin this week is as successful as its owners hope it will be, up to €75 million could soon be sitting in the freshly painted, brightly lit basement of a drab building on Waterloo Road in Dublin 4.

There are 2,500 safety deposit boxes of varying sizes in three concrete bunkers separated by metal bars at Sentinel Vaults, which sits under St Martin’s House on the junction of Waterloo Road and Baggot Street. The owners expect the contents of each box to be worth an average of €30,000.

When The Irish Times was invited to visit on Thursday morning, hours ahead of the final lockdown, we could scarcely pass up the opportunity to case the joint. But Billy Finn, a former AIB banker who is managing director of the new venture, says nobody could pull off a heist here. The site, a former bank, was chosen because it already had a fireproof basement with metre-thick concrete walls. He claims the site is virtually impenetrable and points out that six security checks need to be navigated before a a box can be opened.

First there is a biometric keypad at the bulletproof front door that responds only to the fingerprints of registered users of the vaults. The second door is manned by an off-site security service that checks out callers via CCTV. Then there’s a thick gate at the base of a stairwell, where depositors are greeted by security staff sitting behind bulletproof glass. Another heavy door leads into the vault, which is full of alarms and sensors. To open each box you need two keys, only one of which is held by its owner. And there are dozens of cameras.

The doors on the boxes themselves don’t look too secure, but Finn says it would take a good locksmith at least three minutes to open one of them. So even if a criminal genius could get through all the gates and locks, he’d be able to open only three of the boxes before gardaí surrounded the building. Sentinel Vaults promises a maximum Garda response time of 10 minutes once an alarm is triggered.

Company staff never look in the boxes; users can look at or add to their valuables in a curtained area not overlooked by CCTV.

So what’s to stop criminals using the service to store ill-gotten goods, drugs and guns? “Everyone will have to show a passport, a driver’s licence and a utility bill and will have to have their pictures and fingerprints taken,” Finn says.

The security boxes will cost between €299 and €1,100 a year. “I think there will be a huge demand for the service, particularly since the high-street banks stopped offering a safety-deposit facility five years ago,” Finn says.

He points to Central Statistics Office figures showing that more than 26,000 break-ins were recorded in the Republic in the 12 months to the end of June.

Fears of a banking collapse have receded greatly, but Finn still expects business to come from people who are transferring their assets into gold. “Just look at what happened in Cyprus, ” he says. “How many people would have wished they had their money in safety-deposit boxes there six months ago?”