Don’t stuffocate: making space in a world filled with rubbish

In his book ‘Stuffocation’, James Wallman writes about the dark side of mass consumption, and points to a trend of prioritising paying for experiences over possessions as a solution 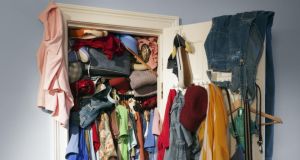 ‘We’ve all been guilty of fast fashion. But there comes a point when the cupboards are full,’ says James Wallman, author of the book Stuffocation. Photograph: Getty Images

It’s the worrying thought that creeps into many of our heads as we embark on a last-minute frantic Christmas shopping expedition. Will these presents really make our friends and family happier? Or will they just take up more space in already crowded homes? Because it’s hard not to notice that over the past few decades many of us have managed to acquire a ridiculous amount of stuff, from kitchen gadgets to cheap jumpers.

In his fascinating new book, Stuffocation (stuffocation.org), James Wallman looks at how we reached this point, and asks what we can do in the future to avoid “stuffocation”.

“I’ve been aware for a while of the fact that materialism doesn’t really work,” says Wallman. “Well, lots of things about it do, but lots don’t. The 20th century felt like a time when everything was possible. And now we’ve now awoken in the 21st century and we’re faced with the negative consequences of our actions. It’s like when you go to a party and have a great time, but then you stay over there and wake up surrounded by all the mess.”

In the early 20th century the western world experienced the rise of mass production. In many ways, this was a good thing. Access to everything from affordable shoes to labour-saving devices has made life easier for millions over the past century. But mass production demanded constant consumption.

“There was a structural change in the system,” says Wallman, and to keep it going, people had to keep buying new things. As ad men Egmont Arens and Roy Sheldon wrote in 1932, “consumer engineering must see to it that we use up the kind of goods we now merely use. Can artificial obsolescence be created?”

The answer, we now know, is yes. And this planned obsolescence soon expanded to include everything from toasters and furniture to clothes. As Wallman writes in Stuffocation, “the amount the average Briton spent on clothing almost doubled between 1990 and 2004 . . . There are twice as many things in [the average woman’s] wardrobe today as there were in 1980.”

Too much of a good thing
But all this stuff isn’t making us happy. Wallman discovered that while, surprisingly, there have been no long-term studies on the effects of the number of possessions on mental health, it has been shown that once a person’s essential needs have been met, their happiness is not affected by their ability to buy more stuff.

He believes that this is because we can have too much of a good thing. “The problem of stuffocation is that the first slice of a cake is really nice. The second is okay. The third is – well, by the time you get to the sixth piece you’re unwell.”

And Wallman believes that more and more of us are coming to this realisation. It’s partly because we’ve become more aware of environmental issues. “The slash-and-burn process we’ve come from isn’t a problem until we have so many people on the planet consuming so much stuff that we’re running out of landfill.”

But we’re also just overwhelmed by all the stuff on offer, and we don’t have room for it. “Once your cupboard is filled with jumpers, it’s harder to stuff another jumper in,” laughs Wallman. “We’ve all been guilty of fast fashion. We think, ‘I’ll have another one’, and now we can afford to buy it. But there comes a point when the cupboards are full.”

Once, the arrival of a shopping bag full of bargains was a source of excitement – but now it can also be a source of stress. “You immediately think: oh, where am I going to put this stuff?” says Wallman. He believes that we’ve reached the state of “peak stuff”, where we have neither the appetite nor the space to acquire more pointless possessions, and says the number of pieces of clothing people are buying has already started to decline.

Of course, for most of the past century this overconsumption has been taking place in the developed world, often at the expense of poorer countries. Now with the rapid growth of the middle class in the developing world, millions more people want access to consumer goods. And we can’t exactly tell them they can’t have a car or a washing machine because we’ve filled the world with rubbish already.

But Wallman is confident that emerging economies will come to their senses more quickly than we did and start consuming sensibly. “If you consider development curves of places like China, India and Brazil, their industrial consumer revolutions are happening so much quicker than ours.” The rise of a new middle class that took place over three generations in the West has happened in just one generation.

“That’s all happening in places like China and Indonesia incredibly quickly. But in the same way, they will hit the point of stuffocation much sooner than us.”

The solution
So what is the solution for all of us? Buying fewer things is the obvious answer, and in Stuffocation Wallman talks to people who have made conscious decisions to live with the bare minimum of possessions. Such extreme measures are unlikely to appeal to everyone, and Wallman knows that people naturally covet nice, new things. But he points to the rise of the “sharing economy”, from music streaming to car-share schemes, as an indication that people are increasingly more interested not in owning something, but having access to it.

Changing priorities
But what does that mean for businesses? If we’re not going to buy things, what are we going to spend our disposable income on? Wallman believes we’re starting to prioritise paying for experiences over possessions, from good meals to evening classes. “Being as opposed to having makes you happier,” he says.

In the book, he writes about the rise of exciting and glamorous cinema, dining and theatre events, but he’s keen to stress that “experientialism” isn’t just for the rich. “In order to make the book interesting I didn’t talk about gardening or going for a walk in the park,” he says. “But an experience can be whatever you want.”

So if you’re looking around for gifts this week, think about getting some nice food, a day at the zoo, a restaurant voucher or even a French class.

Stuffocation by James Wallman is published by Crux