Businesses will vote on the future of Dublin's Business Improvement District (Bid), called Dublin Town, on July 17th. Those who support Dublin Town see it as a promotional powerhouse, while members of the “No to Bid” campaign see it as double tax. 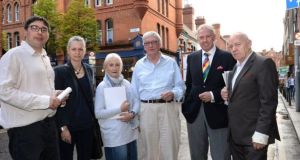 Businesses in Dublin City centre have voted to retain the Dublin Town organisation for another five years.

More than 1500 city centre businesses took part in the plebiscite over the continued operation of the group , formerly known as Dublin City Business Improvement District (BID).

The company was set up 10 years ago and is responsible for the city’s Christmas lights and promotions such as Dine in Dublin and the Dublin Fashion Festival. It also supplements Dublin City Council’s cleaning programmes.

Members must pay the equivalent of 5 per cent of their rates bill each year to Dublin Town, which has an annual income of more than €3 million.Once rate-payers are within its area of operation they are legally obliged to pay, and cannot opt out. The Dublin Town scheme runs for a five-year term.

The vote in favour of retaining Dublin Town was carried by 54 per cent of businesses while some 46 per cent voted to have the organisation scrapped. The plebiscite was administered by Dublin City Council.

When the vote was last held in 2012, about two-thirds of traders voted in favour of continuing the scheme.

However in recent months opposition has been growing in the form of the “No to Bid” campaign spearheaded by Adrian Cummins, chief executive of the the Restaurants’ Association.

Mr Cummins has said the majority of his members are not in favour of the scheme, which he said “duplicates” the work of other organisations such as Fáilte Ireland and Dublin City Council.

The anti-Bid group received a boost in recent days with trade unions Siptu and Impact saying the city’s waste-management services can be provided by council staff, without the need for external providers such as Dublin Town.

Dublin Town has said that in the past two years it has removed 38,000sq m of graffiti, 34,420 “sharp and potentially-infected items”, 1,370kg of glass and 531 metric tonnes of waste from the city’s streets.