Big savings or exchange-rate rip-offs? What the sterling slide means for Irish shoppers

Ireland and sterling have had a rocky relationship since 1460 – good news for some, bad news for others 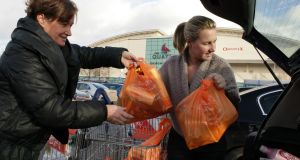 Shoppers from the South loading their car after a trip to The Quays shopping mall in Newry in 2008. Photograph: Paul McErlane/Bloomberg via Getty Images

On the day after British people voted to leave the EU, the Asos website nearly collapsed under the weight of thousands of euro zone shoppers racing to take advantage of suddenly weaker sterling to get some bargain-basement clothes.

The savings of 5 per cent available on that day are starting to look just a little insignificant now, and those early shoppers – just like all those British people with Irish grannies who queued up at our embassy in London during the summer looking for Irish passports – were a bit ahead of themselves.

Had they waited they could have saved much more because the collapse in sterling was not fleeting but sustained and significant. In the middle of October last year, £1 was worth €1.36; today it is worth about €1.09. A year ago, €1 would have bought you 74p sterling. At the time of writing (last Wednesday) it would have bought you 92p. That is more than 20 per cent depreciation in a year.

This is both good and bad news for Irish consumers and Irish businesses. But it is nothing new: so here is everything you need to know about our relationship with sterling, going all the way back to the beginning.

1 We have been here before. In fact we and our closest neighbour have been doing a wildly oscillating currency dance for hundreds of years. According to a most informative History Ireland article written almost 15 years ago by a (then) little known World Bank employee called Patrick Honohan, a standalone Irish currency dates back to 1460 “when the assertive Drogheda parliament unilaterally reduced by 20 per cent the silver content of the penny in Ireland” .

2. Over the course of the following 250 years there were frequent currency fluctuations between Irish and British money. The fluctuations were generally caused when the silver content rose in one country compared with the other. That depended on who was on the English throne at any given time. Irish money was particularly weak when Henry VIII, Elizabeth I and James II were in power as they liked to use our money to pay for their military adventures and opulent lifestyles, the freeloaders.

3. In 1701 exchange rates between the two jurisdictions were fixed and they mostly stayed fixed for almost 300 years, save for a brief period during the Napoleonic wars and then again when we split from the pound and joined the European Monetary System in 1978.

4. The first banknotes we could call our own appeared on Irish streets in the early 1720s but they were not entirely reliable or transferable as they tended to be issued by private banks and were seen as a poor replacement for cold hard cash.

5.Things started to change in 1783 when the Bank of Ireland was set up and given a licence to print money. Literally.

6. In the 1820s – not long after the Act of Union – the Irish pound was mostly abolished and replaced with sterling.

8. That was the year we joined the European Monetary System while the British – displaying the euroscepticism that has been a constant since the dawn of time – decided to stay out of it.

9. Almost as soon as the link between us and them broke, the punt started to fluctuate wildly. In the 20 years since the birth of our little pound, our currency fell below 74p sterling – in the early 1980s – and soared as high as 110p sterling a decade later.

The introduction of the euro did not do much to bring currency fluctuations to an end, and our relationship with sterling remained somewhat rocky. The last time sterling was very weak was 2008. At the end of that year, sterling dropped to a record low against the euro, breaking through the 95p level and edging ever closer to parity.

10.Brian Cowen was barely a day in the taoiseach’s chair when he was picked up by the Dáil microphones swearing in a comment to his new minister for enterprise, Mary Coughlan, about the widening price gap between retailers north and south of the Border. After a Dáil debate about the failure of retailers to pass on savings resulting from a weaker sterling to the Republic’s shoppers, Cowen was heard saying: “Bring in those people and get a handle on it. You know, all those f***ers.”

11. All those “f***ers” and the high prices they were charging sent the Republic’s shoppers across the Border in their tens of thousands. In 2008 as much as €550 million was spent by shoppers from the Republic with the favourable exchange rate cited as the primary reason.

12. There are fears it could all start again. Sterling’s downward spiral since the Brexit vote and its dramatic dip in recent weeks have been a disaster for retailers south of the Border. If the pound continues to tank it will be a very bleak Christmas for many people trying to do business close to Northern Ireland.

13. Buying products directly from UK retailers online has become considerably cheaper since July. The biggest savings can be found in electronics and big-ticket items. It rarely gets bigger ticket than a house. Take the example of a 6,000sq ft mansion on 20 acres with lake-shore frontage that came on the market in Fermanagh last week. The asking price is £1.95 million; it will currently cost a euro buyer about €2.145 million. Had it come on the market on June 11th, prior to Brexit, it would have cost the same euro buyer €2.48 million. That’s a drop of €335,000.

14. But, realistically, people are unlikely to buy a house in Northern Ireland just because it is cheaper now than it used to be. It is quite a different story when it comes to cars. The number of used cars bought in the UK and brought into the Republic since Brexit has gone up by more than 50 per cent compared with the same period last year. From June 23rd to September 15th this year, 16,791 used cars were imported, the overwhelming number of them from the UK. That compares with 10,986 used imports in the same period in 2015. Given the fluctuations, someone buying a €20,000 car in the UK and bringing it to the Republic will save at least €2,000 compared with 12 months ago, even after all the tax and duty are taken care of.

16. Technically the savings we make on groceries should be significant if the products come in from the UK. But they’re not really. As always seems to be the case, retailers have been slow to pass on the currency savings. Retailers deny they are profiting from the collapse in sterling by not passing on savings to shoppers here. Tesco is the big player in that space, as it sources and pays for most of its stock destined for the Republic in the UK. It says it is passing on savings. “Independent data from Kantar Worldpanel shows that the average selling price in Tesco has reduced by 4.1 per cent in the last 12 weeks compared to the same period last year,” a spokeswoman told Pricewatch. She said this was down to “continued investment in lowering prices through ‘Staying Down’ prices, better buying and cost-price reductions due to the fall in sterling”.

17. However, savings of €60 might not be enough when you consider the hassle involved. In 2008, when people from the South were flocking across the Border, there were stories of three-hour queues to get into Newry and then more time looking for parking followed by all the time pushing through hordes of people looking for bargains. Shoppers will have to decide if it is worth the stress.

19. If you shop online with a British retailer and it offers you the chance to pay in pounds rather than euro, do it. The chance of any retailer passing on exchange rate fluctuations is very slim, and you will save money if you pay in pounds.

20. Probably the most immediate savings for some people will be when they travel to the UK for a break. These people will not have to wait for retailers to pass on such savings. The flip side of that, however, is a significant decline in the number of British tourists coming here in recent months. According to some recently published figures, the number of British tourists – an incredibly important market for the Irish tourism business – were down 12 per cent over the course of the summer. And such a decline is bad news for us all.