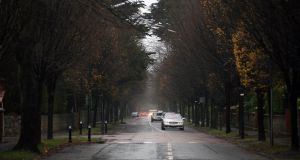 Ballsbridge, one of the most affluent parts of the State, with houses and apartments commanding some of the highest rents and sale prices, has among the worst vacancy rates in the capital.

According to the 2016 census, one in five homes in Ballsbridge is unoccupied, against an average vacancy rate in Dublin city of 9 per cent and a national average of 13 per cent.

However, local auctioneers query the figures, saying that they do not match their knowledge of the area, which runs west of the Dart line, from Raglan Road and Lansdowne Road, to Morehampton Road and Ailesbury Road,

It comprises two electoral divisions, Pembroke East E with 19 per cent vacancy and Pembroke West B with 22.2 per cent. The area centres on Ballsbridge, but runs as far as the edges of Donnybrook and Sandymount.

“You could have knocked me over with a feather when I heard that,” Ballsbridge auctioneer Simon Ensor said. “Every time I hear about huge numbers of vacant homes in this area I have to say I don’t know where they are, and this is the area I am most familiar with.”

Mr Ensor is the chairman of Sherry FitzGerald’s residential division and has been working in the Ballsbridge market for more than 30 years.

There were, he said, two houses on Herbert Park which had been vacant, but had recently been sold and were being redeveloped, and a number on Elgin Road. He said few vacant houses are left empty long-term.

“There were a number of houses accumulated for redevelopment that then ran into trouble in 2008, 2009 and 2010, but a figure of one in five astounds me. I don’t know of any empty houses on Ailesbury Road.”

Local Fine Gael councillor Paddy McCartan also pointed out the derelict houses on Elgin Road, and he said many houses on Clyde Road appeared to be homes, but were actually offices.

However, he queried the accuracy of the vacancy figures. “If someone, whatever their reasons, won’t open the door to the enumerator, they may be counting them as vacant, but what else are they to do?”

Cllr Dermot Lacey (Labour) said owners of high-value empty houses might be holding out for better sale prices in a rising market. “I do see houses in the constituency that have been vacant for a long number of years and I suspect a large element of that is people holding on until such time as prices go up.

“It’s immoral in the current housing crisis. If properties are left idle for a very long period, say five to 10 years, the greater good should be invoked and the State should have the power to confiscate them.”

Mr Lacey did not believe homes were being miscounted as empty because occupants did not answer the enumerator’s knock.

“If you knock on doors enough times you will get a response or a neighbour will tell you if someone lives there. But even if the figures are only half-right, it’s still a shocking amount of vacancy.”