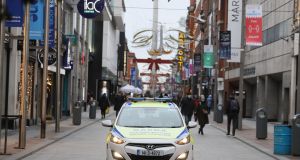 A Garda car on Henry Street in Dublin city centre, where retailers have been asked to defer sales until January. Photograph: Brian Lawless/PA Wire

What happened Next was what the 15 or so men, women and children standing impatiently in a semi-socially distanced queue outside the retailer’s flagship store on Henry Street wanted to know.

While the sign in the Next window said it should have opened its doors at 8am on St Stephen’s Day – a good two hours later than a normal year when it would be in full sale frenzy by 6am – there was still no sign of lights or life inside at around 9.15am.

“I don’t know what’s going on,” the man close to the top of the line said. “I’ve just Googled it and it says the shop should be well open now”.

The queue leading nowhere was as clear a sign as any that the traditional shopping splurge of St Stephen’s Day was not going to plan and would be a whole lot different in 2020 than any normal year.

The winter sales window which had been due to open in towns and cities across Ireland was slammed shut by the Cabinet and by Covid-19 on the eve of Christmas and the shops that had decided to open their doors as scheduled were making it very clear they were not having a sale.

Seasonal discounts? Sure. Sale? Absolutely no way. People were directed online only for that carry on.

Shortly before 9am, the doors of Arnotts opened. On Christmases past, the moment would have been marked by a phalanx of press photographers snapping away at the crowds of people happily streaming through the doors. But on Saturday morning the shoppers were few and far between and the press photographers had been given the morning after the big day off.

All through the beauty hall and across the concessions, staff outnumbered customers by a significant margin.

“I’ve never seen anything like this before,” one member of staff said as he stood trying to make himself look busy.

It was an impossible task, really. Shortly before 9.30am the large television screen at the Mary Street entrance which counts the numbers in the shop in real time read 106. Then 30 seconds later it had fallen to 103. Just over 100 shoppers spread over four floors.

The absence of voices and Christmas songs booming from shops along Henry Street meant conversations that would once have been more private echoed up and down the road. Outside a shut-up Boots, one woman was chatting to a street sweeper.

“There are no queues anywhere,” she said, as yet oblivious to the mini-queue which had formed further up the road outside Next. “And all the shops are either empty or closed. It’s weird isn’t it.”

On O’Connell Bridge, possibly the coldest and windiest part of the city centre, a Garda checkpoint had just been set up and three bitterly-cold looking guards stopped cars and chatted, mostly amicably, to the drivers who rolled down their windows.

It was, if anything, even quieter on Grafton Street with Brown Thomas one of only a handful of retailers to open its doors in the early morning.

This day last week the Brown Thomas plan had been to launch its winter sale on St Stephen’s Day but public health advice and the Government’s demand that sales be deferred derailed that entirely and the shop was very clear that it was not having a sale.

It did have seasonal discounts, mind you, most of which had been rolled out in the run-up to Christmas.

The shop had been due to open at 9am but opened some 30 minutes early, not, one staff member said, to accommodate any queues which had formed.

As it was across the river, the staff members outnumbered the shoppers but, given the times we live in no one was overly glum about that and the signs of the public health messages and the need to keep crowds to a minimum were evident at every turn.

As the gloomy morning sky lightened there was no surge of shoppers and the only groups in evidence were the by-now traditional gatherings of teenage boys in puffa jackets out seeking bargains.

Back across the Liffey in Arnotts several of the puffa groups wandered aimlessly having already scored the trainers they had come in search of.

“Do you have any AirPods?” one young man asked a staff member in the tech department.

“No,” came the terse answer. “They were well gone before Christmas.”

The group shrugged and made a plan to go for breakfast in McDonalds instead.

Shortly before 10am, there was still no movement in the Next queue although many of those who had been waiting had given up and gone in search of offers elsewhere.

The man who had been at the top of the queue was among those who had given up and he had been replaced by a young woman. “It’s still shut,” she said to someone on the other end of her mobile phone line. “I’m not sure what I am doing here.”