Minister will receive a report on the hearings 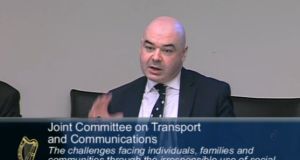 Barrister Fergal Crehan giving evidence to the committee this morning.

Online commentary is as regulated as other forms of speech, but prosecution rates for offences committed on social media are relatively low, an Oireachtas committee has been told.

The lobby group Digital Rights Ireland said there was a mistaken assumption that the internet was an unregulated "Wild West", but that a range of laws were already available to victims of bullying, harassment and other abuse on social media.

"This is an issue that is regulated by existing laws," said the group's chair, TJ McIntyre. He was addressing the Joint Oireachtas Committee on transport and communications, which is investigating ways to curb the "irresponsible use of social media channels".

On online anonymity, Mr McIntyre argued that the principle served a socially useful purpose by protecting whistleblowers and others, and that any attack on it would a retrograde step. However, there was a misconception that legal remedies were not available to unmask anonymous internet users.

He pointed to the existence of so-called Norwich Pharmacal orders, developed by the English courts in the 1970s to require an innocent third party to disclose information about a wrongdoer. Last year, the High Court of Ireland made such an order against owners of message boards on foot of allegations of defamation.

"We think that the approach taken in the Norwich Pharmacal cases and similar cases in Irish and English courts strikes the appropriate balance between the competing interests," the group stated in its submission.

Amid debate over of cyberbullying and calls for new legislation against online harassment, the Oireachtas committee began holding public meetings in February and will compile a report for Minister for Communications Pat Rabbitte later this year.

In its submission, Digital Rights Ireland suggested it would be wrong to think a new law could "combat" the problem. "Laws can only make things illegal - they cannot stop them from happening," it said. "That job is much harder, and cannot be resolved by legal means alone."

In a separate address, Google outlined measures the tech firm was taking to make YouTube safer for young people. These ranged from giving users the option of flagging inappropriate content and choosing strict privacy settings to collaboration with anti-bullying agencies around the world.

Stressing the importance of educating young people on these issues from an early age, Google's head of public policy, Sue Duke, said: "Learning to use the internet today is as vital a life skill as the safe cross code."

On whether new legislation was required, Ms Duke said: "It's not true that the internet is an unregulated, Wild West space. Legislation that exists for offline crime applies to online crime."

"One area we think could be important is educating law enforcemnet agencies in what tools are available to them."

Making recommendations to the committee, Digital Rights Ireland said more funding should be given to the Data Protection Commissioner, whose funding had been cut to 2004 levels . This was despite the office having one of the heaviest workloads in Europe, barrister Fergal Crehan said, on account of the large number of tech multinationals based in Ireland.