Charity shops to be permitted on Grafton Street

Dublin City Councillors decide not to go ahead with proposed ban 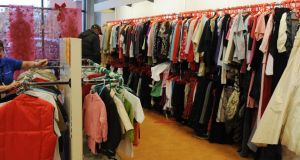 Dublin City Councillors were last night asked to consider the introduction of planning controls which would prohibit certain types of retail outlet from opening on Grafton Street on the grounds they “would detract from the character of the street”. Photograph: Aidan Crawley/The Irish Times

Charities have been given a reprieve by Dublin City Councillors who have voted not to ban their shops from opening on Grafton Street.

Councillors were last night asked to consider the introduction of planning controls which would prohibit certain types of retail outlet from opening on the city’s main shopping street on the grounds they “would detract from the character of the street”.
Charity shops were proposed for inclusion on the list of shops which would not in future be granted planning permission. The list also covers sex shops, off-licences, amusement arcades, fast-food restaurants, euro stores and bookmakers, among others considered unsuitable for the street.

In his report to councillors, acting assistant city manager Jim Keogan said charity shops were recommended for exclusion from the street due to concern about the growth of “lower end retail”. Charity shops were welcome in “all parts of the city, with the exclusion of Grafton Street” he said.

“It is considered that this use would not promote higher order comparison retailing or contribute to Grafton Street’s status as the premier city centre shopping street.”

Fianna Fáil councillor Mary Fitzpatrick said the ban displayed an outdated attitude to charity shops and that as long as they comply with the planning standards being required of other retailers on Grafton Street they should not be subjected to negative discrimination.

Independent councillor Mannix Flynn had supported the ban and said Grafton Street had become “somewhat of an eyesore” .

Independent councillor Pat Dunne said stating that Grafton Street should be an exclusive street “only for people with money in their pockets” was an insult to ordinary people and people working for charities.

Labour’s Dermot Lacey said he didn’t believe “any planning justification for the exclusion of charity shops has been made”.

Fine Gael’s Paddy McCartan said the council should be encouraging high wealth visitors into Grafton Street. “I don’t see how you can compare shops like Weirs and Brown Thomas and others like that with charity shops.”

Ruairi McGinley (FG) agreed there was a need for a “top end” street to be protected.

However, a group of Fine Gael councillors put forward the proposal that charity shops should be allowed to apply for planning permission and the planning department be allowed to decide whether the particular shop was appropriate.

A joint Fianna Fáil, Labour and Sinn Féin motion calling for charity shops to be removed from the list of prohibited outlets was passed by 29 to 16 votes and the rest of the planning control scheme was approved.

Fundraising Ireland and the Irish Charity Shops Association had asked the council not to go ahead with the ban.