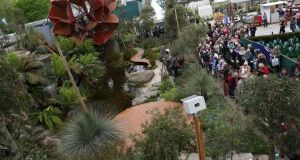 The Trailfinders Australian Garden has won the gold medal and Best in Show at the Chelsea Flower Show 2013 at Royal Hospital Chelsea in London today. Photograph: Tim P. Whitby/Getty Images

Gnomes, gardeners, rock stars and royalty, — there’s surely no other annual social event in the world quite like the RHS Chelsea Flower Show, which opened its doors to the public today.

Exactly a century has passed since the inaugural show took place in the historic grounds of Sir Christopher Wren’s Royal Hospital, where it was attended by Queen Alexandra (England’s then-Queen Mother) and acclaimed as “a great and unqualified success”.

Yet despite this being its centenary year and the attendance of many celebrities including Jerry Hall, Ringo Starr and Helen Mirren as well as the aforementioned gnomes enjoying a temporary lifting of the long-standing RHS ban, celebrations seem somewhat subdued at this week’s event, as do many of the show gardens.

A harsh, cold spring hasn’t helped; nurseries have struggled to bring plants into leaf or flower in time, while designers have been confronted with the kinds of weather conditions (strong winds, hailstorms, heavy rain) not exactly conducive to landscaping.

The result, on press day at least, was a vague but discernible look of exhaustion on the faces of many of the exhibitors, a mood underscored by the grey skies and chilly temperatures.

Nor is 2013 a vintage Chelsea for the Irish. While both Houses, Castles & Gardens  (HCGI) and The Happy Hen House both have handsome stands at the event, eight-times exhibitor and former gold medal winner Diarmuid Gavin is absent from this year’s line-up. So, too, is Paul Martin, whose 2003 silver medal-winning garden ‘Lazy Salad Days’ made a piece of Chelsea history by becoming the very first to be awarded the accolade of ‘People’s Choice’.

Instead, Ireland’s one real chance of a medal rests with Naul Garden & Flower Group, who’ll be staging a floral art exhibit entitled ‘The World Comes To Chelsea’ later in the week.

Of the fifteen large show gardens that do feature in this year’s show, much in particular was expected of the Swedish landscape architect Ulf Nordfjell and the English landscape designer Christopher Bradley Hole, both seasoned Chelsea exhibitors known for their polished, contemporary style. But while both deservedly won gold, neither took home the much-coveted ‘Best in Show Award’ which instead went to ‘Trailfinders Australian Garden’, designed by Phil Johnson and presented by Fleming’s Nurseries- the very first time that an Australian entry has carried off such a feat.

Elsewhere in Chelsea’s historic show grounds, visitors sipped from flutes of champagne and enjoyed the many truly remarkable, gold-medal displays of plants and flowers staged in the Great Pavilion.

1:00 Schengen Area countries refusing US tourists over fear of COVID-19