British government knew of dangerous deficiencies in use of rubber bullets 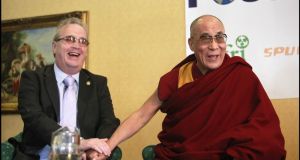 Richard Moore, who was blinded by a rubber bullet, with the Dalai lama

The British army and ministry of defence were aware of lethal deficiencies in the use of rubber bullets but nonetheless went ahead and employed them in the early years of the Troubles, it has emerged.

The British ministry of defence decided to settle a damages case with a well-known current-day peace activist because it feared contesting the case would expose the lethal dangers of rubber bullets, newly uncovered documentation has revealed.

The case relates to Derry man Richard Moore who was blinded aged 10 when he was struck by a rubber bullet fired by a British soldier in Derry in 1972. Mr Moore, a peace campaigner who recently hosted the Dalai Lama in Derry, subsequently forgave the soldier who shot him.


Troubles
During the Troubles, 17 people died as a result of being struck by rubber or plastic bullets and many more were injured. Three died from rubber bullets and 14 from plastic bullets which were introduced in the mid-1970s. Eight of the 17 were children and all but one was Catholic.

What the papers uncovered by the Pat Finucane Centre in Derry reveal is that the British ministry of defence was aware that the rubber bullets were inadequately tested before they were brought into use. They and their lawyers feared that if Mr Moore’s lawyers sought such disclosure this “embarrassing” information would enter the public arena.

The legal case came to a head early in 1977 and related to 1972 when a rubber bullet was fired at a group of youths which the army said was attacking an army guard post at the Rosemount British army/RUC station in Derry. Lawyers for the British army and ministry estimated that Mr Moore, if successful could win between £50,000-£100,000 damages. The case was eventually settled out of court for £68,000.

Repercussions
They also feared it could have an effect on a case the Government was taking against the British government at the European Court of Human Rights in Strasbourg over the treatment of, mainly, nationalist and republican detainees by the British army and the RUC. They further worried that it could have repercussions relating to an incursion of SAS soldiers into Co Louth in 1976.

“The main difficulty on what would otherwise be a promising case relates not to the incident itself but to the question of whether the rubber bullet was a suitable and safe weapon for riot control purposes at all,” one of the confidential documents states.

An extract from another key document adds: “The papers will disclose that the tests were carried out in a shorter time than was ideal because the army needed a riot control weapon quickly, that the Ministry was aware that it could be lethal, that it could and did cause serious injuries, that these penalties were accepted in order to give the army a riot-control weapon of lower lethality than the SLR (self-loading rifle) in the shortest possible time.”

Paul O’Connor of the Pat Finucane Centre said the information could have implications for old cases of deaths and injuries caused by rubber bullets.

0:36 Joe Biden tells a black interviewer that 'he ain't black' if he supports Trump

1 Coronavirus: Numbers receiving pandemic payment falls as thousands return to work
2 Pricewatch: Left on the shelf - what we are no longer buying
3 Unidentified man has been in Irish psychiatric hospital for 30 years
4 Archaeologists are ‘quite sure’ they have found Red Hugh O’Donnell’s burial place
5 Coronavirus: People told not to make appointments to buy furniture
Real news has value SUBSCRIBE