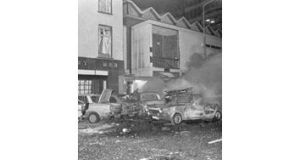 
The scene outside Liberty Hall in 1972.

Ms Monica Duffy-Campbell, whose husband Tommy Duffy was killed in the Sackville Place bombing, also told the subcommittee of Committee on Justice, Equality, Defence and Women's Rights she was "quite astounded that the British government have not even had the courtesy to reply to letters for the Barron report when they were asked."

The sub-committee is examining a report by Mr Justice Henry Barron into bombings in Dublin in 1972 and 1973. Three people, including Mr Duffy, died and 185 were injured in the bombings.

On the evening of December 1st, 1972, a car bomb exploded near Liberty Hall in Dublin. There were no fatalities, but many were injured.

On January 20th, 1973, a car bomb exploded at Sackville Place, killing Mr Tommy Douglas (21), a native of Stirling in Scotland. He had been living in Dublin for just four months and was working as a bus conductor for CIÉ.

The bombs at Eden Quay and Sackville Place in December 1972 facilitated the passage of tough anti-terrorist legislation through the Dáil under a vulnerable Fianna Fáil government by ensuring the co-operation of Fine Gael.

At the time, and for years afterwards, there was a strong suspicion that British intelligence operatives had been involved.

In his report published last year, Mr Justice Barron noted that although aspects of the 1972 bombings had not reflected a traditional loyalist pattern and a strong case had been made for British security involvement, he had found no evidence to substantiate it.

"On the night that Tom died, a couple of hours later, that Bill was passed," Ms Duffy-Campbell told today's hearing.

"I will believe until the day I die that the British government or British agents were involved in the death of my husband.

"The one thing I would like the Oireachtas Committee to think about is examine this further ask why we didn't get this information," she said.

"The British government is supposedly a friendly nation. We are not at war with it. Why have they decided to stand totally back from this and not give any answers? What have they got to hide?"

Ms Duffy-Campbell said she had a daughter and was four months pregnant when her husband was killed.

"My life has changed beyond belief that night. My husband at the time was 24 years of age. He was a young vibrant, happy-go-lucky, hard-working, loving husband, went out to work, full of expectations in life, full of what the future might hold for us as a couple and family," she said.

"The next time that I was to see Tom was in a coffin in North Strand following the bombings of the 1st of December, 1972."

Earlier, Mr Cormac O'Dúlacháin, barrister for the Justice for the Forgotten group, said the bombings in 1972, 1973, and in 1974 in Dublin and Monaghan "had a confirmed cross-border dimension.

"In all cases the detection and prosecution of those responsible was dependent on the co-operation and actions of two police forces," he told the sub-committee hearing this morning.

"No one has served one day in prison. And if anyone were to be convicted, the period of imprisonment they would now serve would under the provisions of the Good Friday agreement would in all probability be insignificant."

A "pattern and a policy of non-co-operation" is emerging, he added.

Yesterday, the committee chairman, Mr Seán Ardagh, said he was "not impressed at all" with the failure of the British authorities to co-operate with the subcommittee or with Mr Justice Barron.

"It is of particular regret that the British authorities did not co-operate with Mr Barron when he was writing his report, nor have co-operated as yet with us in our consideration of the report," he said.