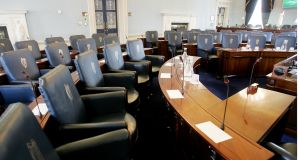 The Bill that will trigger the referendum to abolish Seanad Éireann will come before Cabinet in the next few weeks, the Government spokesman has said.

Taoiseach Enda Kenny brought a memo to Government last week and a discussion was held. The spokesman said tonight that the Taoiseach would be bringing the legislation to Cabinet shortly.

It was confirmed that the electorate will be asked for to vote Yes or No to the proposition of abolishing the second chamber when polling takes place in the early autumn. There will be no alternative proposals considered, a scenario which rules out a choice being offered on a reformed Seanad.

The spokesman said last night that while the modalities have yet to be worked out, the Government would put forward its reasons for the abolition of the second House and its complement of 60 senators.

Spokespeople for both Coalition partners said Fine Gael and Labour were in full agreement on the approach and indicated that the vote in both Houses would be whipped rather than a free vote.

The abolition of the Seanad, whose members are not directly elected by the public, formed part of the Programme for Government.

While Sinn Féin has indicated it supports the abolition of the Seanad, Fianna Fáil has recently announced it will oppose the move and will instead campaign for reform. Fianna Fail today contended the Government was unprepared for an autumn referendum.

A response to a parliamentary question submitted by party leader Micheál Martin disclosed that €2million has been allocated to the budget of the Department of the Taoiseach for the establishment of a Referendum Commission this year.

However, figures from last year’s children’s referendum show that some €14 million was spent in total for polling station staff, count centre staff, postal costs, the referendum commission and OPW costs.

Fianna Fáil said the allocation of only €2 million suggested very little thought had gone into the planning of the referendum to abolish the Seanad.