As the Dáil vote nears, the heat on politicians is bound to increase 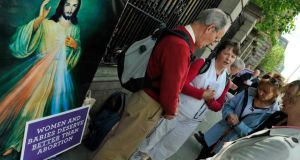 People gather outside the Dáil on Kildare Street t the beginning of the debate on the Protection of Life during Pregnancy Bill. Photo: Clodagh Kilcoyne

The posters appeared on lamp-posts overnight in Tallaght earlier this month. They had been recycled from Fine Gael’s campaign during the children’s referendum. But the only part that had been preserved intact was Fine Gael’s logo from that campaign: “Every Child Matters”.

The rest was directed at local TD and Minister of State Brian Hayes. The sentence in full now read: “Every child matters except to Brian Hayes?” It featured an image of the face of a foetus in a rictus of agony. The other slogan was equally stark: “Stop Abortion”.

Hayes found the experience going beyond the usual slings and arrows of political life.

“They were put up where I live and at the school where my children go. This is the work of a lunatic fringe. Those [behind personalised targeting and abuse] are very small in numbers and they are mad. My only concern is if the Bill is passed one or two may flip. I am beginning to believe there may be some violence.”

Back in February, the anti-abortion group Youth Defence published a number of photographs recording a similarly unsavoury incident that occurred at its offices in Capel Street, which it shares with the related Life Institute. Its members arrived in one morning to find newspaper pages with Savita Hallapanavar’s name posted on the door which was also extensively daubed with excrement. The group is known for deploying confrontational campaigning tactics and some would argue that the rule about pots and kettles applied. But this went beyond that, like the posters about Hayes, and into the realm of intimidation and extremism and fear.

Past experience
It was no great surprise, given past experiences, that the debate on proposed changes to the abortion laws would be intense, divisive and give rise to anger and polarities. Those claims and counter-claims have especially come to the fore in the past 10 days in the run-up to this week’s Dáil vote on the second stage of the Protection of Life during Pregnancy Bill, with Taoiseach Enda Kenny insisting on all his TDs and Senators obeying the party whip.

A number of Fine Gael TDs have said they have been intimidated by anti-abortion fanatics. Taoiseach Enda Kenny was continuously heckled during a 20-minute speech in Longford last week.

At times the nature of the campaign itself has become the story. The most recent trigger for that were comments by the Taoiseach in the Dáil earlier this month in which he gave a flavour of the intensity of the lobbying he has been subjected to: “I am now being branded by personnel around the country as being a murderer – that I am going to have on my soul the death of 20 million babies . . . I am getting medals, scapulars, plastic foetuses, letters written in blood, telephone calls all over the systems and it’s not confined to me,” Kenny said.

Tone of debate
That gives rise to a number of questions. Has the tone of the debate been more frenzied and spiteful than in the past or has the intensity and heat of the 1980s and 1990s faded in memory? And are the trolls representative of broader movements, or a “lunatic fringe”? Finally, is there merit in the charge of anti-abortion campaigners that Kenny and other Fine Gael TDs have used misdirection techniques, using the threats as a means of demonising their opponents while avoiding debating the substantive issues?

There is no doubt that many Fine Gael TDs believe the lobbying has been the most intense in their careers and a minority have been shaken by some of the tactics.

The two most identifiable anti-abortion groups, the Pro Life Campaign (PLC) and Youth Defence, have conducted high-profile campaigns but both say they condemn any intimidatory tactics or threats.

PLC, the biggest group, has been responsible for a campaign where tens of thousands of postcards have been sent to TDs and Senators from all parties with strident anti-abortion messages. It has also had a high-profile presence on all forms of traditional print and broadcast media, as well as on the internet. Its spokespeople – William Binchy, Caroline Simons, Cora Sherlock and Berry Kiely – appear regularly on radio and TV.

Youth Defence is perceived as more direct and provocative in the manner in which it campaigns. It has been involved in pickets of TDs’ offices and also consciously uses very graphic imagery, as its spokeswoman Niamh Uí Bhriain says, to remind people of the reality of abortion.

Both organisations are well-funded and have conducted extensive campaigns against the legislation for over two years. PLC has confirmed it spent some €200,000 last year and will spend substantially more this year because of its intensified campaign. Both also confirmed last January they received small unspecified donations from abroad.

For her part, Uí Bhriain stands over some of the tactics her organisations employs which others consider confrontational and provocative. “Pickets have been held outside the offices of TDs around the country, and we’ve been very glad to support those pickets which have been peaceful and life-affirming.”

She said there seemed “to be an expectation that pro-life groups should be meek and silent. I don’t agree. I believe the issue is far too important.” She also defended the use of images of foetuses. “I have to tell you honestly that these images upset me as much as the next person, but that they are hugely effective at changing hearts and minds. Abortion is archaic, cruel and bloody. If we don’t want to face that reality, then why are we legalising it?”

A small minority of protesters, with no apparent link to those groups, have gone much further. Over 20 Fine Gael politicians say they have been on the receiving end of pickets, posters and poison letters. Alan Shatter had very similar posters to those seen by Brian Hayes – including the distortion of the slogan. Minister for Health James Reilly received an anonymous arson threat. Three TDs – Regina Doherty, Jerry Buttimer, and John Halligan – have contacted gardaí after receiving emails containing death threats.

The email to Buttimer threatened to “cut him from neck to navel . . . and lower down.” Halligan said that he was warned to look under his car every morning.

Buttimer, the chair of the Oireachtas Health Committee, was shaken by the email. “I, as chair of the committee, have sought to have a debate that has been respectful and tolerant. By and large that has been the case. Some of the extreme element, particularly on one side of the equation, in the tenor, in the vitriol, in the lack of respect leaves a lot to be desired.”

Is it only one side which has been indulging in underhand and nasty tactics? Two factors have to be borne in mind when comparing this campaign to 1983 in which the electorate voted to amend the Constitution to acknowledge the right to life of the unborn.

In 1983, the lobbying came overwhelmingly from one side, with a powerful Catholic Church throwing its weight behind a Yes vote. TDs received thousands of letters, phone calls and visits. Now, the societal and political backdrop is different and the public debate is very much two-way.

The second factor is the advent of the internet and all forms of social media, particularly twitter. While the huge majority of contributors stay within bounds, there is a minority who have used it for hate-filled and expletive-ridden poison pen purposes.

The victims, overwhelmingly, have been identifiable anti-abortion activists who have been subjected to vindictive personalised abuse. If you google the names of Ronan Mullen, Caroline Simons, Niamh Uí Bhriain, David Quinn, William Binchy or Cora Sherlock it won’t take long to find nasty stuff. People on the other side, such as Senator Ivana Bacik, have also been on the receiving end.

Anti-abortion groups have complained of a disparity in reporting of the debate and have argued that threats and personalised attacks made on them have received scant coverage. Cora Sherlock of PLC said several of its members received death threats earlier this month but they went to the gardaí and did not choose to publicise it. Others are sceptical that the Taoiseach actually received a letter written in blood. They also claim he has returned to this theme in the Dáil three times since December, as a way of avoiding other issues.

‘It’s a disgusting attempt to demonise the pro-life movement rather than debate the proposed legislation”, Sherlock said.

Smearing online
Ronan Mullen, who has himself been subjected to smearing online, has contended the Taoiseach has not acknowledged the abuse is not confined to one side. “Selectively drawing attention to abusive anti-abortion correspondence does a disservice to the tens of thousands of members of the pro-life movement who are sincere, respectful and well-intentioned.

“I myself am fairly regularly subjected to abusive and threatening correspondence, both via traditional and social media. To publicise the specifics of such correspondence would be totally unfair to the vast majority of people who describe themselves as ‘pro-choice’ and who conduct themselves in a fair and civil manner when engaging with public representatives.”

On this point, it seems there is agreement from both sides. Sinead Ahern of Choice Ireland, which campaigns for wider availability of abortion services, has said they have been subjected to very personalised abuse by phone and email though in recent months there has been a fall-off despite the “odd email and tweet”. But in the past, she said, there have been deeply unpleasant incidents. Somebody followed her down the street in an intimidating way and the group’s mailing list was hacked.

Asked about the nature of some attacks being launched on social media by pro-choice supporters, she said: “It’s a very emotive debate with very firmly held beliefs. I find that level of personal attack to be disturbing. I get very frustrated with people on my side engaged in it as they would be the first calling for heads if it was directed at us.”

3 Exemption of vaccinated people from mandatory hotel quarantine being considered