Winning ticket was sold at an undisclosed location in Dublin 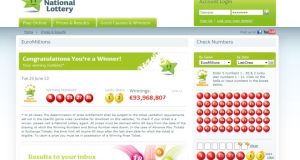 Was it you? Were you met with this screen after checking your EuroMillions numbers on the lotto.ie website? The location of the lucky winner of last night’s almost €94m EuroMillions jackpot has yet to be confirmed by the National Lottery.

The lucky winner of last night’s almost €94 million EuroMillions jackpot has contacted the National Lottery to claim their prize.

The winner bought the ticket at an undisclosed Dublin location and wishes to remain private. The ticket has been verified.

A spokeswoman for the lottery declined to say if the ticket was bought by a single player or a syndicate. She also declined to identify the shop which sold the ticket.

The retail outlet that sold the winning ticket will receive €25,000.

There were two winning tickets sharing the top prize of over €187,937,614, the second highest win in Irish lottery history. The other winning ticket was sold in Belgium.

The National Lottery’s lotto.ie site slowed after news of the win emerged. EuroMillions draws are held every Tuesday and Friday night in Paris and the lottery is played in several European countries. All prizes are tax-free.

Last night’s win is the fourth time the EuroMillions jackpot has been won in Ireland.

A family claimed some €15 million after purchasing a quickpick ticket in Carrickbeg, Carrick-on-Suir, Co Tipperary in July 2008 but Limerick woman Dolores McNamara remains the State’s biggest lottery winner. She won € 115 million in the EuroMillions in 2005.