Second-hand clothes will be quarantined for 72 hours before sale, says the charity sector 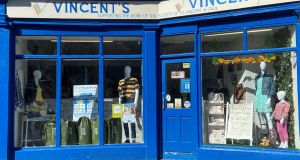 Across the charity shop sector, new cleaning regimes have been put in place with hard surfaces such as CDs, bric-a-brac and books regularly wiped down.

“All clothing donations will be quarantined for 72 hours before they are put out for sale,” says Dermot McGilloway, national retail development manager for St Vincent de Paul. The charity is preparing to open 95 of its 234 shops on Monday, in accordance with the Government’s Covid-19 roadmap, which permits smaller non-essential retail outlets to open once all health and safety measures are in place.

The charity sector faces more complex issues in reopening than other retailers – not least because it relies on donations for stock.

The 72-hour quarantine for all textiles is in place to kill coronavirus – and it has been adhered to throughout the sector following advice from its representative body, the Irish Charity Shops Association (ICSA ), which in turn took guidance from the World Health Organisation.

Managing donated stock in this way isn’t something that fazes Colette Miller, retail operations and development manager at Barnardos. “Don’t forget that in this sector, even in normal times stock doesn’t arrive into shops on rails wrapped in cellophane; we’re used to pressing and steaming clothes before they go out on the floor so this is just another step.”

The children’s charity is preparing to open three of its eight shops on Monday, including its smart bridal shops in Dún Laoghaire and Wexford and its Dalkey shop. The wedding dresses are new, often surplus stock donated by specialist retailers and designers, and shopping is by appointment.

Customers will be allowed try on the dresses which if not bought then will be taken out of stock and “put through a sanitisation process” according to Miller.

Otherwise changing rooms in shops will be closed – a move that according to the ICSA also gives small shops which are tight on shortage a place to quarantine donations.

'We’ve seen how retailers have discouraged parents from bringing children into their shops; we won’t be doing that'

Across the sector, new cleaning regimes have been put in place with hard surfaces such as CDs, bric-a-brac and books regularly wiped down.

Staffing also presents challenges unique to this type of retail. Most shops have a mixture of staff: a manager paid by the charity, some on community employment schemes, and an army of volunteers – 6,000 overall, many of whose age profile or other factors will see them cocooning for the near future and unable to come to work.

“Availability of staff was one of the factors determining whether we could open particular shops,” says McGilloway, and his reopening calendar has had to juggle the different regulations in the North as the charity is an all-Ireland body and no date has been announced for small shops reopening across the Border.

Then there are the Covid-19 compliant measures that apply to all retailers, including a queue system outside and strict door policies to ensure shoppers inside can maintain a two-metre distance – a challenge in this sector given the small size of most shops – hand sanitiser stations, Perspex screens at tills and, in many shops, contactless payment.

“Although we will still be taking cash, because that’s the way many of our shoppers pay,” says McGilloway. And we’ve seen how retailers [in other sectors] have discouraged parents from bringing children into their shops; we won’t be doing that.”

Managing just how long customers stay to browse will undoubtedly be a challenge because for many, the joy of charity shopping is you’ll never know what you’ll find and that takes time.

“Our colleagues in New Zealand [there are 2,000 VdeP shops worldwide] have already opened up and they tell us that people are spending less time than they would have before,” says McGilloway. Whether that is due to post-lockdown shoppers not wanting to be in an enclosed space for too long, or the subliminal pressure of knowing there’s a queue of people outside waiting to get in, isn’t clear.

Throughout the lockdown some charities have continued to sell through online charity retail portal Thriftify, an Irish social enterprise founded by Rónán Ó Dálaigh. NCBI, Simon Community, VdeP and Oxfam currently have items on the site, and Ó Dálaigh says several other Irish charity retailers signed up last week, prompted by the physical closure of the shops.

The site operates a “scan, sell, ship”, model whereby it prices the items – “Charity shop managers often don’t realise how valuable some items can be, particularly books, says Ó Dálaigh – and after the sale, organises shipping. The shop holds the item until sold. It allows, he says, charities to maximise their return on donations but also to extend their reach, giving the example of a book on Japanese whiskey donated to an Irish charity shop that sold to a UK buyer for £180, “It would probably have sold for €4 in the shop”, he says. The site charges the charity a negotiated commission.

Readying any retail operation in this environment is a considerable logistical and costly task, and some charities have decided to wait. The Irish Cancer Society, for example, is holding off reopening its 20 stores; and for some the phase-two plan (whereby outlets in shopping centres are not permitted to open) makes it impossible.

At the 15 Oxfam shops in the Republic, staff returned on Wednesday to prepare to open up for donations. “All Covid-compliant measures have been put in places,” says Alice Dawson-Lyons, adding that all staff will wear masks and have their temperatures checked at the start of each shift.

“After over two months of closure, and the significant loss of income that came with it, we need those donations more than ever - especially as we are now responding to the threat of Covid-19 in already very fragile places,” she says, of the charity’s global work

Miller is not anticipating a shortage of donations to Barnardos or indeed any other charity given the weeks of decluttering that’s being going on in homes across the country, although she has heard concerning reports of an increase in opportunistic rogue collectors, dropping empty plastic “charity bags” at households for later collection.

“We would really ask people to check where they are donating. To make sure it’s to a member of the Irish Charity Shops Association.”

The closure of retail outlets has been a considerable blow to the charity sector as they are a key revenue stream – last year shops in the sector made an €8 million net contribution to the St Vincent de Paul’s coffers to enable it to continue its work, and ICSA members took €69 million in sales last year, selling 11.5 million garments and serving 10 million customers.

But while revenue is important, shops are seen by all charities as part of a wider offering, not least as access points in the community where people can come in for help, information, and advice. “A visit to a shop is sometimes a gateway to access our services,” says McGilloway.

And all charity shops will be more important than ever in the community with their affordable good-quality clothing, shoes and household items, he says. “After the health crisis there’s going to be an economic crisis.”

This Connemara coastal home will blow you away
4