‘With borders closed, I’m locked up in a giant playground’ 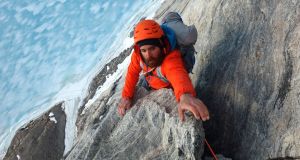 Sean Villanueva O’Driscoll is the first solo climber to make it across Patagonia’s iconic mountain range, the Fitz Roy massif.

The day after Sean Villanueva O’Driscoll turned 40, he stood alone on the summit of Cerro Fitz Roy, the highest mountain in the South American region of Patagonia.

Belting out the traditional Irish song An Poc ar Buile at the top of his voice, the Irishman – though he has never lived in Ireland – pulled out his tin whistle and filled the Andean air with trad melodies. Alone, elated and midway to writing himself into the history books, Villanueva O’Driscoll was more than halfway across the Fitz Roy massif, Patagonia’s iconic mountain range.

No solo climber had ever traversed the forbidding peaks – recognisable as the mountain silhouette on the logo of the eponymous clothing brand – in one go.

Villanueva O’Driscoll took 10 days of supplies with him. He completed the climb – comprising more than 5km of ridge line, and close to 4000m of vertical gain – in six.

“I actually had no idea how long it would take,” he laughs from his lodgings in El Chaltèn, the Argentinian mountain village he’s called home for the past 13 months. “I estimated 10 days, yet it’s extremely rare to get a 10-day weather window in Patagonia. So, I decided that if I got a six-day window, I would give it a try. Once I saw one [on the forecast], I decided to see how far I could get.”

It’s hard to believe that Sean, who has a strong Cork accent and repertoire of Irish trad tunes, has never lived in Ireland. Born in Belgium to an Irish mother and Spanish father, he identifies as Irish and has only ever held an Irish passport.

Growing up trilingual near Brussels, he spoke English with his parents, Flemish at school and with his sisters, and French on the streets. His father decided not to complicate things by introducing a fourth language at home, so Villanueva O’Driscoll wouldn’t master Spanish until he started coming to Patagonia in 2005, a place that he felt a life-changing connection to. “This is my seventh time here and I just love it.”

Introduced to climbing by friends at 13, he was soon hooked. “I just enjoyed the effort that it demands, to fight hard to get to the top.” Drawn to remote and harsh locations, he has climbed new routes and virgin walls in Pakistan, China, Venezuela, Greenland and Baffin Island, as well as several in Patagonia.

It’s summer there now and climbing season, but with Argentina’s borders closed there are few international climbers. “I feel like I’m locked up in a giant playground! It’s just so amazing to be here, and all of us who are feel we have the whole range to ourselves.”

Villanueva O’Driscoll enjoys his own company. Stuck without his regular climbing partner, Nicolas Favresse, he had wanted to undertake a solo expedition for a while. “At first, the Fitz Traverse seemed completely unrealistic: too much work and just too dangerous. But I thought it wouldn’t hurt to dream about it. And then, one day, I found myself thinking that it was possible.”

Climbing from south to north, he summited all 10 peaks, the seven main ones and three satellites, naming his climb “The Moonwalk Traverse”.

“Everything just fitted into place, and I made some lucky decisions too, like stopping at the right places to sleep.”

Waking at 5am every day, after five hours sleep, Villanueva O’Driscoll would rise in the dark and sit in his tent meditating before setting off at sunrise. “Up there I really tried to focus on the present, on things like my breathing or the view or any sensations and sounds.

“Usually, on an extreme climb, you don’t have time for that or you don’t do that kind of stuff, but here, I was on my own, I was just there to live this experience. I don’t usually meditate but this was more like a personal quest for me.”

Climbing all day, until sunset, he would spend his evenings cooking and melting snow to make water for the next day. He brought a watch with an alarm he hardly needed and a camera. “I had no radio or contact with the outside world, and that was important to me. I wanted to be up there alone and kind of disconnected.”

Villanueva O’Driscoll also brought one important piece of equipment: his tin whistle. Twice yearly trips to Ireland, enjoyed since he was born, have given him a deep love of his Irish culture. “My family in Kilcrea in Cork are very into singing, so we used to have sing-songs at Christmas, and I learned a lot of the old trad songs.”

When he started travelling, his climbing partner, Favresse, always brought his guitar, so Villanueva O’Driscoll decided to learn the tin whistle. “It was a really logical choice; it’s very light and pretty easy to learn.” He now considers it an essential part of his equipment and takes it on every climb.

“Music is a great way to relax and bring things back to reality. Sometimes, up there, when it’s very difficult or very dangerous, things can get really heavy. Playing a little tune can just relax you, ground you a little and help you not to feel too crushed by the weight of the challenge ahead.”

With this audacious ascent successfully achieved, where does Villanueva O’Driscoll hope to conquer next? “Antarctica. It’s always been on my mind, because of the big rock walls there and it’s probably the most isolated place in the world.”