Covid-19 blamed for end of Belmond Grand Hibernian, which will move to mainland Europe 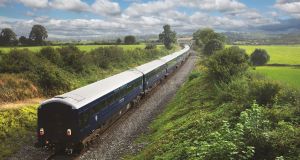 Belmond Grand Hibernian: the service will not resume in 2021

Ireland’s first luxury sleeper train, the Belmond Grand Hibernian – a sister train to the Orient Express – is to pull out of Ireland.

Belmond, the company that runs luxury hotels, trains and canal boats across the globe, says it is “too early” to reveal the train’s new base, but it expects it to remain in Europe, “where demand for immersive, slow-travel experiences of this kind is increasing”.

Introduced in 2016, the Grand Hibernian offered a two-night tour from Dublin to the north Co Antrim coast for from about €2,650 per person.

Passengers tended to be wealthy American visitors who typically stay in Ireland longer and spend more per visit than other nationalities.

The all-inclusive prices covered visits to tourist attractions such as Titanic Experience in Belfast, falconry at Ashford Castle, the Giant’s Causeway and the Jameson distillery. Optional golf excursions were also provided.

Bespoke Irish-themed entertainment was provided in the evenings, with a variety of musicians and singers coming aboard as the train parked overnight in sidings at places such as Charleville, Co Cork.

The train operated for six months of the year, from April until the beginning of November, and services for the first year were sold out well in advance.

Laid out in distinctive blue livery, it had 11 carriages, including five sleeping carriages, two dining cars, an observation lounge, staff accommodation carriages, and a generator carriage. They were originally built by British Rail for CIÉ, from 1980 to 1989, and were withdrawn from service in 1989. They were sumptuously refitted by Belmond at a cost of €7 million.

Belmond did not comment this week on whether the service would ever resume in Ireland. In response to questions it issued a statement saying due “to the ongoing challenges presented by Covid-19” it had decided “to relocate its Grand Hibernian train operation in the near term”.

The carriages are to be renovated “to preserve their unique character whilst the interior design is evolved” in keeping with the chosen destination, “once known”.

In addition to the Venice Simplon leg of the former Orient Express, Belmond also operates to destinations including London, Paris, Florence and Rome. It also operated the British Pullman and Royal Scotsman trains in Britain.

A spokeswoman said the company wanted “to thank Irish Rail and the Department of Transport, Tourism and Sport in Ireland, including Tourism Ireland, for the essential support they have provided since the Grand Hibernian journey launched in Dublin in 2016.”

Barry Kenny of Irish Rail said Belmond had advised it that it had decided to relocate the train. “We wish the company well with its future plans for the Grand Hibernian train and its rail journey portfolio generally.”