Cycle series: Kinsale to Kilmurry and back – let the Bandon be your companion 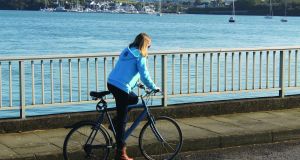 There are tremendous views of the Bandon River along much of this route and some lovely villages in which to grab a coffee. Innishannon, though very busy, is beautifully situated on the river.

Start the cycle at the bridge just south of Kinsale on the road to Garretstown. Cross the bridge and pass the ruined tower house on the right. This is the R600. Along the road, after 6km, pass the turn-off on the left for the Old Head of Kinsale.

After another few hundred metres there is a right turn off the main road. This is the L3223. A good-surfaced, meandering, hilly road follows to reach the village of Ballinadee.

At the first fork in the village take the right-hand option. This leads past Kilmacsimon Quay and touches base again with the River Bandon – a companion for half of the entire route. From here to Innishannon the road surface is awful, though the views of the river through the banks of reeds and trees are splendid. The village of Innishannon is charming in spite of the traffic.

Cross the bridge into the village and take the first left, a climb that brings you past fields of daffodils (January to March), an interesting variation on the standard crops grown in Ireland. The next main stop is Kilmurry, some 21km farther. There are many side roads that look similar to the desired option. It is more or less in a straight line from Innishannon.

The first point of confusion occurs after 6km – go right. The next confusing point is after another 2.5km – go left. After another 4.5km, take a sharp right. The road now runs straight to Bealnablath, 5km distant. The surface is reasonable for the most part. Cyclists unfamiliar with Irish history may be surprised at the massive memorial at Bealnablath. It is dedicated to the memory of Michael Collins of the Free State army who was killed in August 1922 by an anti-Treaty republican sniper during the Civil War.

The village of Kilmurry is 3km farther along the road, which has a couple of challenging climbs. This is a good spot for a break as it is the turning point of the route.

Batteries recharged, take the right-hand turn towards Crookstown. As this is high ground there are some stunning views of green fields all around as you plummet onwards. Pass through Crookstown and take the second right towards Bandon, the R590. After 6km the road divides. Take the left-hand option, the L2235. As there is still a decent bit of height and the road is good there is scope for some fast downhill cycling. Next is the village of Upton. Continue through a T-junction and swing around to the right, before another stunning 4km section downhill into Innishannon.

The last leg again travels above the River Bandon to Kinsale. Turn left on arriving in Innishannon and mount the hill facing you after 200m. There follows a magnificent cycle for several kilometres on the R605 through a wood above the river. At the first obvious fork take the right-hand option, which leads back to the car.

Start/finish: The starting point is the bridge just south of Kinsale on the road to Garretstown. There is ample room before the bridge for several cars. Returning on the final leg of the route affords a carefree downhill spree.

The verdict: Stunning route in places, poor road surface for 5km, but great ascents and descents.

An edited extract from ‘Cycling Munster – Great Road Routes’ by Dan MacCarthy (The Collins Press, €14.99), available in bookshops and online from collinspress.ie