The biggest travel stories of 2017 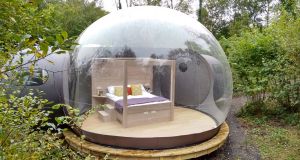 The most read feature in travel in 2017 was not about some exotic location abroad, but 100 of the best places to stay in Ireland. It seems when it comes to places to stay Ireland has an eclectic mix of venues. Take the star gazing domes in Finn Lough: The bubble domes surrounded by unspoiled forest were just one of the entries in the top 100.

The funniest travel related story of the year is more about the fact that it took place on an aircraft. A suspicious wife used her sleeping husband’s thumb to open his smartphone. When she discovered evidence of his infidelity, she became angry and when cabin crew could not calm her down, the Qatar Airways plane en route to Bali had to be diverted to Chennai in India, where the couple and their child were offloaded.

The habits of Irish guests as told by hoteliers around the country provoked a lot of interest from readers. It seems we are not the ideal guests we think we are. Hoteliers told of messy guests, drunks, scammers, naked men and generally a lot of annoying visitors.

When an Irish castle appears in the list of 25 best travel experiences in the world, there is a certain amount of pride. Ashford Castle took its place on this unique list compiled by US travel advisor Chad Clark. He is aiming to certify travel “experiences” to create an annual list, similar to what the Michelin Guide is for restaurants.

Baggage is a serious issue with our readers and knowing the new rules for Ryanair was well read.

Just to recap, if you pay for priority boarding or the premium fares you can take a handbag and a cabin bag on board. Otherwise your cabin bag will be taken off you and put in the hold at no extra charge.

The curiosity to see Adare Manor when it opened after a lengthy refurbishment and rebuild was high. The opening saw this already well known hotel move alongside some of the best in the world. Expect to see it appearing on all the top lists in 2018.

Travel website Tripadvisor named Chapter One restaurant on Dublin’s Parnell Square as the number one restaurant in Ireland. The result was generated by the reviews given by diners for the one Michelin star restaurant. Number two on the list was An Port Mor in Westport and three was the Chart House in Dingle.

People were fascinated at the idea that you would pay €450 a night to sleep in a tent. The news about the Hideaways at Dromquinna Manor near Kenmare had people wanting to know what you get for €450. According to John Brennan, proprietor of Dromquinna Manor, the Park Kenmare Hotel and occasional TV personality, “Value is not always related to price. This is a really unique and special place. It is so peaceful with nothing in front of you except the water.”

The old adage “if you build it, they will come” holds true for Waterford’s new Greenway. Opened earlier in the year it is estimated that 250,000 have walked, cycled and run the 46km route. The Greenway has already made a significant impact on tourism in the Deise and piqued our readers’ curiosity.

Irish pubs abroad will always attract the curious and a new Irish pub in New York, named after Oscar Wilde had a lot of interest. The $4 million premises are packed with lots of Wilde memorabilia as well as having the longest bar in the city at 118ft.

Other stories in travel included a trip to Porto, the Portuguese city that is rising up the ranks of cool places to visit. People were fascinated by lists and top reading included the best campsites in Europe, 50 best places to eat and enjoy around the coast of Ireland.

Twenty hidden treasures by Manchan Magan is worth a look back on.

We started the year with 52 places to go in 2017 and in 2018 will have lots of new places to explore. Keep an eye out for our guide to travel this year on January 6th.