Where are the hot travels spots for 2018? 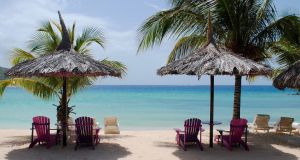 Mexico bound: all inclusive tips to resorts in Cancun are expected to be in demand from Irish holidaymakers

More than 38,000 people streamed into the RDS Simmonscourt over the weekend for the annual Holiday World Show which was home to more than 1,000 travel professionals from 55 countries for three days – impressive numbers but what destinations and types of holiday were people most interested in? Here’s what we learned from the three-day event.

Top of the list with many people is travel to the United States and Canada. In the adventure holidays sector, a host of new companies, such as Hayes and Jarvis, TDActive and Explore, have arrived as people search out, and are willing to spend more on new experiences.

Among the most popular stands at the show was Visit USA, with more than 40 destinations represented. Aer Lingus said many inquiries related to more offbeat locations, such as Hartford, Connecticut, Seattle, and Philadelphia, along with the traditional big cities of New York, Boston and Chicago.

Mary McKenna of Touramerica and winners of the ITAA Travel Agency of the Year Award, had more than 1,000 inquiries and some bookings over the weekend. Popular destinations included Orlando and Las Vegas.

Tryphavana Cross, marketing director at Las Vegas Convention and Visitors Authority, commented: “We had a very busy show this weekend with a significant increase in bookings. One of the agents on our stand reported bookings up threefold on last year.”

At US specialists Platinum Travel, fly-drive holidays were very popular, with many inquiries for Virginia, Georgia and in particular the Golden Isles, a series of islands off the coast of Georgia.

Canada, a fast-growing destination, was very well represented by tourism organisations from across the country. Mexico too was also in demand – Tuiholidays had all-inclusive trips to Cancun.

Caribbean cruises are more popular than ever with Irish people – there are four flights per day from Ireland to the region an the new Aer Lingus route to Miami from last September has helped to increase that business. Celebrity Cruises will have five cruises departing from Dublin between April and June to northern and southern Europe.

Several new Irish tourism initiatives were unveiled. Discover Galway is focusing on food tourism as part of the European Region of Gastronomy and it was the launch of the Galway2020, city of culture initiative.

Munster Vales, a new destination marketing organisation for the region from the Comeraghs to Ballyhoura and incorporating the Galtees and Knockmealdown mountains, will promote the area as an ideal location for family holidays and outdoor pursuits.

Irish Waterways are promoting the Blueways – think of the numerous “Greenways” but on or close to water. Several are already in place, such as the Lough Derg Blueway which has paddling trails with many complimentary walking and cycling trails. More are planned to open around the country this year. With the cost of boat hire coming down, these activity holidays will be more accessible to many.

Perennial favourites Spain and Portugal will be many people’s choice for annual and short-break holidays. Spain had the largest pavilion in the show and every region of the country was represented. Last year there were almost two million visits to Spain from Ireland. Portugal is growing in popularity and is benefiting from increased air routes from Irish regional airports. Almost 300,000 people went to Portugal last year.

Most European countries were well represented and many reported an increase in capacity for 2018. Caravans, motor homes and camping, especially in France, Spain and Italy, are still as popular as ever, judging by the level of interest at the show.

Adventure holidays featured strongly. The Explore travel agency, which offers holidays in more than 130 countries , said it expected to appoint an agent in Ireland “as we cannot cope with the number of inquiries. Stand-out trips that were inquired about were walking trips (in Europe, mainly) and Antarctic polar trips. Cycling and self-guided continued to be popular – both already very well established with the Irish market.

Bespoke holidays are also becoming popular with families. Newly arrived Hayes and Jarvis will be offering experiences in 60 destinations worldwide and Wendy Wu, specialist in the Far East, reported its Irish business doubled last year. The company plans to offer a range of holiday in South America this year.

Many far eastern countries were represented, including China, Taiwan, and Thailand. Malaysia, which had a strong year in 2017 with 23,000 Irish visitors, is expected to grow in popularity with the introduction of flights from Dublin to Penang with Qatar Airways, beginning on Saturday, February 5th. Cathy Pacific’s direct flight to Hong Kong from Dublin, which starts in June, is expected to further boost numbers to the region.

Consular services of the Department of Foreign Affairs had a big stand at the show and were demonstrating to people how to order passports online. The online service takes less than two weeks to get a renewal. The also were assisting in preparing documents for getting married abroad. Many people do not realise that they need Letters of Freedom from the government in order to get married abroad.