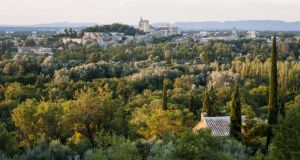 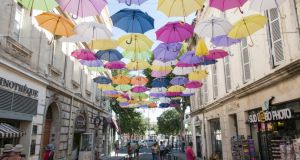 An umbrella installation for the Arles Photography Festival. Photograph: Stefano Buonamici for The New York Times 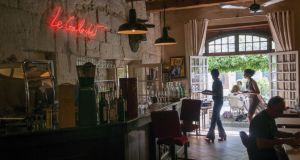 Exploring Provence’s vast, rugged sprawl can be exhilarating – and daunting. From the salt marshes of the Camargue to storybook hilltop villages like Gordes to the lively Mediterranean city of Marseille, the famously picturesque French region offers an array of landscapes and experiences that could take months to uncover.

Where to start? Arles and Avignon. Just 20 minutes apart by train, the Roman-era town of Arles and the medieval walled city of Avignon enfold a dense mix of architectural beauty, world-class art, sun-soaked Provençal gastronomy and Unesco World Heritage sites. Toss in ambitious new cultural spaces, a hint of urban cool and a high-speed rail link with Paris (about three hours away), and the result is a southern French smorgasbord that can be devoured in a weekend.

4pm - Art of Arles
Vincent van Gogh created more than 300 works during his 15 months in Arles, in 1888 and 1889. Alas, not one van Gogh canvas remains in Arles, not even at the splashy new Fondation Vincent van Gogh, which organises van Gogh-related exhibitions by contemporary artists. Practically his only trace resides in the Musée Réattu, a castle-like 15th-century edifice containing an 1889 letter he wrote to his friend Paul Gauguin. In a tiny scrawl, he praises Wagner, bemoans the prose of Uncle Tom’s Cabin and laments his psychological state. The museum also has drawings by Picasso, sketches by the fashion designer Christian Lacroix (an Arles native) and photographs by everyone from Brassaï to Berenice Abbott. Admission, €8.

5.30pm - Roman roamings
They came, they saw, they erected an entertainment complex. Dating to the first century AD, the grand Roman arena, les Arènes, once packed in some 20,000 spectators for gladiator battles with exotic beasts – and with one another. Maintaining the tradition of men fighting animals, the arena hosts summer bullfights. Next door, the ruins of the colonnaded theatre are a pleasant spot to wander or watch a concert. Admission for both sites is €8.

8pm - Aim for the Middle
Inside Le Galoubet, which evokes both the Middle Ages (stone walls, beamed ceilings, massive hearth) and the mid 20th century (industrial lamps, red neon sign), an upper-crust crowd dines on traditional French cuisine that is far from middling. The three-course menu (€31) might start with crunchy local vegetables and cervelle de canut (a zesty cheese spread) or a soft-boiled egg atop a colourful arrangement of soft-cooked red peppers, eggplant and ham slices. Mains might include hanger steak with mushrooms or veal in tangy wine-mustard sauce. For dessert, the cake enveloped in a chocolate shell with sour cherry sorbet on top is a rich, dark, citric delight.

10pm - Starry Nightcap
A nocturnal walk quickly becomes an art history lesson. Heading west from Place Lamartine, you arrive at the riverside spot where van Gogh painted Cafe Terrace at Night. Strolling the east side of Place du Forum, you might recognize the scene from The Night Café, marked by a signboard. For drinks, avoid the square’s tourist traps and instead go around the corner to Baràvin, a cheerful wine bar, for a glass of medium-bodied local Château Mont-Redon red (€4.50).

11am - Pope Art
It’s good to be pope. If you happened to be one of those who lived in Avignon during the religious turmoil of the 14th century (when the papacy abandoned Rome), you would have presided over an immense Gothic palace filled with soaring banquet halls, huge vaulted chapels and lush gardens populated with peacocks, camels and other exotic fauna. These areas and more are viewable in the Palais des Papes, whose smaller rooms are equally impressive. The papal bedroom is painted with cosmic swirls of vegetative motifs, while the study is covered by mystical frescoes of a nocturnal stag hunt in a forest inhabited by a dragon and unicorn. Admission, €11.

3pm - Books, Pillows and Bow Ties
Whether you’re desperate for a skateboard-shaped chopping board or just a coffee-table book about, say, breasts, People’s Paradise provides. One of several hip fashion and design shops near Place St Didier, the lifestyle emporium outfits you for summer with ultralight, hand-dyed T-shirts (€30) from the Provençal brand Red Soul, and red rolled-up shorts (€59) by Elevenparis. Kooky and colourful, the namesake shop of Isabelle Erizé sells her lacy, tasselled Baroque-style handbags (€25) and cushions mixing stripes and leopard print (€27). CQFD boutique, dedicated to indie French brands, adds wooden sunglasses (€160-€190) from Shelter and wooden bow ties (€65-€70) by Bowtify.


11am - Art Times
Two Reopened in July, the Collection Lambert, a museum of excellent modern and contemporary art, has expanded into the adjacent townhouse, doubling its size. The permanent collection includes sculpture by Sol LeWitt, paintings by Jean-Michel Basquiat, photos by Nan Goldin and much besides. The museum is also hosting an inaugural special exhibition (through October 11th) about Patrice Chéreau, the late French opera, theatre and film director. In addition to Chéreau’s personal effects, sketches and notes, the show intersperses creations by artists who inspired him or relate to his oeuvre, from classic French painters like Delacroix to contemporary international figures like Anselm Kiefer. Admission, €10.

What can €120k buy you in Italy, Greece, Cyprus, Lithuania and Louth?
5