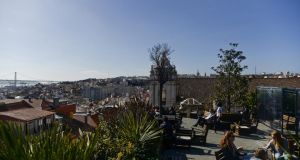 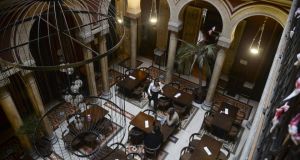 Everything old is new again in the Portuguese capital. Throughout the hilly metropolis on the Tagus River, fading structures and spaces are being stylishly reborn.

Even the city’s dowdy, underused central square and adjacent waterfront have been spruced up for lounging and strolling. At the same time, the city’s classic historical charms, from art museums to industrialists’ mansions, remain beautifully intact, complementing their rejuvenated neighbours.

For years, the monumental 18th-century square called Praça do Comércio was surrounded by dull government offices and blighted by construction sites for sewage and transportation projects. In the past few years, however, the square’s icons – an ornate triumphal arch and a statue of King Dom José I – have been refurbished, and a host of new cafes, bars and boutiques has moved in. The outdoor terrace of the Museu da Cerveja, a beer museum (forgettable) and bar (worthwhile), has lovely views along with beers from Portugal, Brazil, Mozambique and other Lusophone lands. The dry and yeasty Templarium (€5) offers a window into another compelling development: an evolving trend of Portuguese microbrews.

Seedy, stinky and garbage-strewn, the waterfront strip languished for years. Thanks to a recent municipal clean up, the seaside is now frequented by joggers, strollers, cyclists and picnickers who take advantage of the new tree-lined path, gently graded stone steps and kiosk-like cafes along the riverbank. Art-world denizens might recognize the colourful ship called Trafaria Praia. Covered in traditional blue and white tiles and filled with twinkling installations evoking the sea, the ferry was conceived by the artist Joana Vasconcelos and formed the Portuguese pavilion at the Venice Biennale in 2013. At 11am, 3pm and 6pm from March through to October, the boat offers a one-hour scenic ride.

A tidal wave of new bars continues to wash through the waterfront streets of the Cais do Sodré district. The naughtiest nights unfold at Pensão Amor, which suggests the tufted salon of a debauched baron.

Nude portraits, Orientalist paintings, mounted stag heads, leopard-print banquettes, Kama Sutra manuals and even a tarot reader pack the rooms, while the extensive menu of classic cocktails animates the evening with concoctions such as the Corpse Reviver #2 (made with gin, Cointreau, Ricard, Lillet Blanc and lemon juice; €12.50).

Some of the best things in life are not free. Qing dynasty Chinese porcelain vases. Paintings by Pieter Bruegel the Younger. Marble water basins from Versailles. Luckily for Lisbon visitors, the late businessman António de Medeiros e Almeida had deep pockets and a thirst for exquisitely wrought items, resulting in a late 19th-century mansion overflowing with decorative arts. As you stride over the marble floors of Casa-Museu Medeiros e Almeida, you can appraise yourself in gilded mirrors by Thomas Chippendale, walk past 19th-century carpets woven in the Silk Road city of Samarkand, worship at a carved altar from a church in Goa and admire an intricately decorated sky-blue porcelain bidet.

Pig is big at Charcutaria Lisboa, where aged, air-cured hocks of acorn-fed porco preto (€15 per 100 grams) are finely sliced into fatty red ribbons. It’s just one of the many boutiques and food stands – from sushi stalls to juice bars – in the recently revamped Mercado de Campo de Ourique, a soaring 1930s market. Shrimp is big at Mercado do Marisco, whether boiled with sea salt (€9) or pan-fried in garlic and butter sauce, while Atalho do Mercado adds turf to the surf in the form of lamb chops (€10.50), smoky-succulent picanha beef sandwiches (€5.70) and other meaty treats.

Resplendent with horseshoe arches, geometric mosaic floors, arabesque swirls of chiselled plaster and other Moorish flourishes, the disused 19th-century mansion across from Praça do Principe Real was reborn in 2013 as a “Conceptual Shopping Gallery” called Embaixada. The stately rooms are occupied by local Portuguese boutiques and brands such as Urze, which sells elegant Portuguese wool goods, and Temporary Brand, a concept store stocking everything from canned sardines to silver hightops by iShoes.

Almost next door, Entre Tanto is another historical townhouse that has been similarly upgraded into a stylish haven for local indie shops and designers. Within the rambling warren of rooms you’ll find Fresh, a brand of handbags that mix clear acrylic surfaces with traditional textiles, as well as Nichts Neues, an emporium of retro cinema seats, industrial lamps, mid-century modern Scandinavian furniture and other vintage treasures. To help you clean up after your ramblings, Patine stocks soaps, lotions, shower gels and more from Portus Cale, a venerable manufacturer based in Porto.

Situated near St Christopher (São Cristóvão) church, the new Leopold restaurant exudes humility and grace. White walls and wooden tables lend a restrained air to the tiny, hushed space, while the tile floor and glass cabinets honour its past life as a bakery.

In the same manner, the precisely made comfort food shows respectful devotion to old-time Portuguese recipes (soft-boiled egg with mushroom, Azores steak), while sometimes favouring modern interpretations. Alheira sausage, for instance, is a lush pork-veal blend whose savoury smoothness plays off sweet tapioca spheres simmered in Port wine. The cod is equally worthy, thanks to a crunchy-sweet texture from cornbread crumbs and a Far East dose of umami using shiitake mushrooms. The banana cream dessert is served with shavings of pungent Queijo São Jorge. Dinner for two, without drinks, costs about €60.

Directions to Park aren’t promising: walk into a downbeat concrete parking garage, take the graffiti-stained elevator to the top floor, and trudge up the ramp to the roof. But the pay-off is a surprising oasis of trees, bushes and exotic flora, with lovely views over Lisbon’s hills.

Within this well-planted former parking lot, an international crowd in eclectic footwear – boots to Birkenstocks, high heels to hightops – sips caipirinhas (€6.50) and rosé wine from the Alentejo region (€3.50) from the bars.

Sundays are sleepy in Lisbon – unless you discover Room 61 of the Museu Nacional de Arte Antiga, a repository of excellent European painting. That particular gallery shakes the soul. Salome, by Lucas Cranach the Elder, is an early 16th-century depiction of that celebrated seductress holding the grisly severed head of John the Baptist. Nearby, another disembodied head – a human skull – sits on the desk of a sunken-eyed, long-bearded St Jerome in Albrecht Dürer’s 1521 painting named for the saint. But the most unnerving image by far is Hieronymus Bosch’s Triptych of the Temptations of Saint Anthony Abbot, the Betrayal of Christ and the Way to Calvary (1500), which unleashes a feverish nightmare of monsters and debauched humans in a fiery apocalypse.

The garden cafe, which serves up cappuccino (€1.70) and river views, is your recovery room – and final glimpse of the ever-evolving city.

Michael Harding: How I learned to stop worrying and love my enemy
7