Walk for the weekend: Take in the beauty of Lough Currane 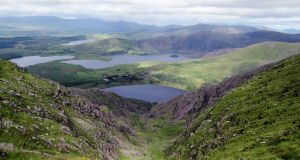 Make sure to carry a map, compass and rain gear when walking around Lough Currane

To the east of Lough Currane lies a ridge which forms the northern half of a vast horseshoe which runs right around to the south east corner of the lake.

I’ve walked sections of it but never tackled the whole thing at once as it indeed would be a long day in the hills with some difficult ground to negotiate.

Before I describe the route I want to clear up some possible confusions.

This area appears on both Sheet 83 and 84 of the Discovery Series.

I was using the 5th Edition of Sheet 84 which has some alterations to place names.

Curiously, the highest point on the whole circuit, (Trigonometrical Station 675m, Grid Ref: V 593 683), is unnamed on all editions of both sheets.

It is named as An Bheann Mhor in A Guide to Ireland’s Mountain Summits (Collins Press).

Name or no name, the mountains are still the same and as this ridge rises out of a landscape lavishly endowed with lakes and bays it promised to be a rewarding day’s walk.

From the car park, walk up the track to two farm gates.

Use the left-hand gate which leads to a large farm house. Halfway along is a shed with a multi-coloured roof.

Take the track beside this and follow the fence uphill.

Bracken makes the going irritating at the start but, once you get through, it is easy going to Spot Height 484m which is at the foot of the spine of a steep spur which leads up on rocky ground to our unnamed summit at 675m (to avoid confusion I am using the information on the OS Map).

The view from the summit did not disappoint.

It was a still day with a cloud cover of uniform grey strato-cumulus.

So, the numerous lakes lay like great pewter plates on the landscape.

To the west, Lough Currane emptied out into Ballinskelligs Bay and the sea beyond lightened to a silver sheen on the horizon.

There is an easy descent to a col with views down into rocky gullies and the lakes beyond.

The two nearest lakes, Loch na mBreac Dearg and Loch na hEisce, are both revised names on the new edition.

From the col it was an easy ascent on to a small plateau, the high point of which is An Ghuala Ghorm (650m) from where there are views of Kenmare Bay and the Beara Peninsula.

On the way back, once I had reached the col I decided to contour my way along the lower slopes as I thought it would save time – a foolish decision, as I ended up ploughing through bracken growing out of very rocky ground.

The sky might have been grey but the air was blue.

So, I can say from experience; retrace your steps to the start.

Start and finish: A grassy clearing on the Kerry Way. Grid Reference: 569 670

How to get there: Heading south from Waterville on the N70, take the first turn to the left about 200m past Waterville Bridge. Stay on this third class road which runs for 6km along the southern shore of Lough Currane until you come to a junction with a track which has a Kerry Way Marker.

You can drive for two kilometres up this track until you come to a grassy clearing just beyond a quarry.

Even the doghouse has style at Kilmainham terrace for €425k
4