Walk for the Weekend: A new route around Glendalough

The area around Glendalough is always popular, but the beautiful tranquillity of the valley on the other side makes a delightful change 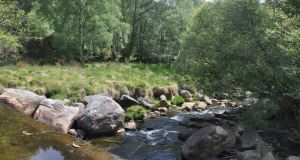 What makes perfectly sane people slog up mountains, muscles screaming, water sloshing around their ankles, looking absolutely horrendous in their woolly hats and weather-proof jackets? Does the old religious teaching about suffering being good for you and your reward will come in the next life have anything to do with it?

Or perhaps on a wet Sunday they prefer that sort of punishment to queuing to get into shopping centres or suffering an interminable Sunday lunch with “The Rellies”.

We’ll never know, but on any wet, soggy weekend there will be people gagging to get into those hills. The area around Glendalough is always popular for obvious reasons, but instead of heading towards the Upper Lake, the less trodden valley on the other side makes a delightful change.

This is Glendasan Valley and funnily enough there’s an indistinct track above it called Madman’s Road. Enough said.

No bog brown river here, just glass clear water ambling along to meet up with the Glenealo river

The walk starts at the Interpretive Centre car park and heads out onto the main road leading to Glendalough village and towards the upper car park. A few hundred meters past the bridge there is a road to the right, at a small sign saying Riversdale House.

This immediately takes you away from the traffic and into the beautiful tranquillity of the valley, along the banks of the Lodestone Brook. No bog brown river here, just glass clear water ambling along to meet up with the Glenealo river at The Visitor Centre.

Continue along this path as it climbs gradually towards the site of the old lead mines, which operated on and off from 1825 to 1957.

Despite the dangers of mining, surprisingly only three men lost their lives here, the first in 1864, the second in 1875. However, in 1957 when two men were drilling they suddenly struck some dynamite. James Mernagh, aged only 25, was killed.

By this time the lead seemed to be running out and this situation, combined with the tragic accident, resulted in the mines being closed for good, which must have been a real blow to the community as up to 80 people had been employed there in the early part of the 20th century.

The aforementioned Riversdale House soon appears and immediately after it is Fiddlers’ Row, not that you can really see anything, but apparently in the mid 19th century eight musicians had lived along this stretch of the river.

When the path reaches the same height as the car park on your right, the track goes both upwards and straight on. Keep straight following the track as it curves around the side of the hill and crosses the Luganure Brook, then climbs more steeply uphill, more or less parallel to the stream.

The ground finally levels out at Camaderry East top, which is just a wide, open plateau with a well-worn track coming up from the valley and heading to the top. Turn right here and follow it until you reach the usual pile of stones indicating the highest point. The views are spectacular even if the summit is a bit flat.

Retracing one’s steps is not ideal, but once you are back to the East Top you are in new territory. This is easy walking on wide open ground. As soon as some gorse bushes appear right in front of you, veer to the left, following a grassy track which joins a forest track. It will zig-zag back to the Glendasan Valley. Don’t miss the small sign saying National Parks and Wildlife Service, where you keep straight on.