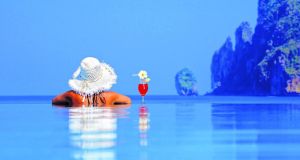 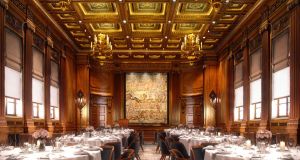 The opulent interior of the new Park Hyatt in Vienna 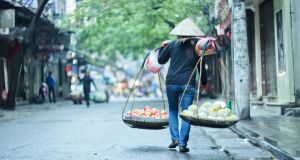 All-inclusive holidays are often pitched as the cost efficient option, especially for families, but they can in fact be more expensive than going it alone and paying for travel, accommodation and meals, separately. According to a survey from the Post Office Travel Money in the UK, a week for a family of four in an all-inclusive resort in most of the top European resort destinations – the Spanish costas, Majorca, the Algarve, Cyprus and Sunny Beach in Bulgaria – can work out up to €1,250 more expensive than a seven-night holiday where you make your own arrangements and pay for your own meals and drinks.

The survey found a week in the cheapest all-inclusive resort available in Majorca in July or August will cost €4,338 for the family, compared to €3,045 for the cheapest B&B break at the same time – and this includes the extra cost of eating out and drinks. All-inclusive holidays are increasingly popular with Irish holidaymakers: Ireland’s biggest tour operator, Falcon Holidays, has seen a “double-digit” increase, according to general manager, Carol Anne O’Neill. She acknowledges that it is possible to find cheaper go-it-alone options, but says this kind of study doesn’t take account of “unlimited drinks, ice creams and snacks, entertainment and activities for kids”.

FIVE RESTAURANTS IN SAN SEBASTIAN
The Fiesta de San Fermín kicks off tomorrow in Pamplona with the Running of the Bulls. Despite (or because of) its immense popularity, many dismiss it as Spain’s most overrated experience. But a meal in San Sebastian, 80km to the north, and Spain’s unofficial gourmet capital, rarely is. With 16 Michelin stars, including three restaurants with three each, you’ll remember a meal here for a while.

Akelare
(Paseo Padre Orcolaga 56; akelarre.net; tasting menu €175) Chef Pedro Subijana earned his three stars for his superlative interpretation of nueva cocina vasca, or new Basque cuisine, which uses local produce and transforms it into something special.
Arzak
(Avenida Alcalde Jose Elosegui 273; arzak.info; meals €190) Juan Mari Arzak’s genius has earned him three Michelin stars and his restaurant the reputation as one of Europe’s best. He is now assisted by his daughter Elena (voted the best female chef in the world in 2013). The food here – a multi-course exploration of nueva cocina vasca­ – is sublime. You’ll need to book two months in advance.
La Fábrica
(Calle del Puerto 17; mains around €16, tasting menu €25) Modern Basque cuisine is all the rage in town, but few in the midrange category do it quite as expertly as this restaurant just up from the port.
Martín Berasategui Restaurant
(Calle Loidi 4, Lasarte-Oria; martinberasategui.com; tasting menu €195) You’ll have to travel 9km southwest of town to get to this superlative restaurant, where the 12-course tasting menu is considered one of the greatest in the world – and has been awarded three Michelin stars.
Restaurante Kokotxa
(Calle del Campanario 11; restaurantekokotxa.com; tasting menu €78) Tucked away in an alley in the old town, this Michelin-starred spot is the place to go for a more affordable taste of brilliance – the €50 market menu is one of the best lunch deals in Spain, at this level, made with whatever the market traders are selling on that particular day.

GRANDEUR IN VIENNA
Vienna’s luxury hotels have a new competitor with the opening last month of the Park Hyatt Vienna (above), straddling Am Hof Square and the new pedestrian Goldenes Quartier. The 100-year-old building was once the HQ of the Austrian Hungarian Monarchy Bank and is part of Vienna’s First District, a Unesco World Heritage Site. Inside are huge rooms, contemporary art, Italian marble and a swimming pool (in the old vault) with golden tiles. Rooms start at €375; see vienna.park.hyatt.com

TREE-TOPPER
French eco-theme park Défiplanet is offering something a little bit special – from caravans and yurts to a treehouse château that sleeps up to 10 in four bedrooms and costs between €265 and €279 a night. There’s also a spa bath, a lounge and a full kitchen – 24ft above ground. The family-oriented park also has a riding centre, spa, high rope course and a decent restaurant. Défiplanet is 30km south of Poitiers on the road to Limoges. Ryanair flies to Poitiers from Shannon, from €27.99 each way. From Dublin, the nearest airport is La Rochelle (flights from €61, three times weekly), from where it’s a two-hour drive. See defiplanet.com

RENT YOUR CAR FOR CASH
A new car-sharing initiative might be the solution to avoiding parking charges at the airport. Tripndrive is a new scheme where passengers leave their car at the airport for others to hire. They get free parking and a fee for every kilometre driven, while renters get up to 60 per cent off regular car hire prices. The scheme has been rolled out at major French airports and will soon be available throughout Europe, including train stations. See tripndrive.com

HOLIDAY SNAPS
If you’re in London between July 11th and August 17th, the Royal Geographical Society (1 Kensington Gore, SW7) is hosting the Travel Photographer of the Year exhibition, featuring the winning entries from the 2013 competition, which saw Timothy Allen’s series on Mali take the honours. Entrance is free; see tpoty.com