The 12 walks of Christmas

Get the air and work off a mince pie or three 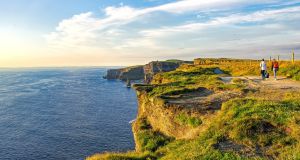 The turkey is not the only one getting stuffed this Christmas. Amid all the glasses raised and the dinners downed, give your body a break on one of our 12 walks of Christmas.

Dublin is blessed with great coastal walks, whether up to Howth Head or out to sea to the Poolbeg Lighthouse or Bull Island. But the other great advantage of the capital is that a few minutes in the other direction brings you to mountainous wilderness. Make the most of it with a hike along part of the Dublin Mountains Way long-distance route. The easy 6km section starting at Cruagh Wood is just perfect for walking off a festive night out, taking you past the panoramic viewing point at Killakee, on to the Featherbed Forest and down through the soothing greens of the Glenasmole Valley.

Suitable for: Getting away without having to travel.

Have a right royal walk in Longford

The full Royal Canal Way would take six days to complete and no one hates Christmas that much. But you could take a little breather from the in-laws with a jaunt along the redeveloped 16km stretch that links Longford town to Richmond Harbour at Clondra. Enjoy the peace and tranquillity of the off-road trackway – silent but for the whizzing of cyclists – and finish up where the Royal Canal meets the Shannon river.

Beat a trail to Kilkenny

Take the Brandon Hill Loop, beginning and ending at Graiguenamanagh, for a challenging 18km trek to the top of Kilkenny’s highest point (515m). Start out on country roads before hitting forestry tracks and hillside paths, and return via a steep and rocky descent. One for serious walkers – the kind that can check each other’s boots out at 50 paces – it takes around six hours to complete.

Christmas on the cliffs

Head out along the 20km Cliffs of Moher coastal walk in Co Clare from Liscannor to Doolin for spectacular views out over the cliffs – at Aill na Searrach see the giant “Aileen’s” wave that attracts serious surfers from around the world – the Aran Islands and Galway Bay. Do it in sections or take on the entire route, with plenty of time for photography pit-stops. And if you don’t feel like overloading the backpack, factor in food at the Cliffs View Cafe at the Cliffs of Moher Visitor Centre, due to reopen from its Christmas break on December 27th.

Difficulty: Three mince pies if you do it all.

Not suitable for: Those looking to break in new Christmas boots.

Tóg go bog in a bog

Stretch your legs along one of five trails at Lough Boora Discovery Park in Co Offaly, a nature haven open 365 days of the year, including Christmas (though the visitor centre cafe is only open weekends in winter). The flat terrain features lakes, wetlands and woodlands with around 50km of walkways to enjoy. These range from a gentle 3km stroll through the sculpture park – with artworks made from old bits of Bord na Móna machinery, nicer than it sounds – to the 16km Turraun Route. There’s history at a Mesolithic site, thriving wildlife (mostly hibernating), and a fairy trail for the kids.

Difficulty: One to two mince pies, depending

Suitable for: Wellies, the open area at the start gets very wet in winter.

Take a trip to Tipp

Tucked away in the hills of scenic Slieveardagh, on the border with Kilkenny, is a short walk that stretches way back in time. Set out from the tiny but historic village of Grange for the Grange-Crag loop, a 6km walk that includes the ruins of 12th century Kilcooly Abbey, an old ice house, and a Wellington monument commemorating Napoleon’s defeat at the Battle of Waterloo. This last was erected in 1817 but only rediscovered – to general surprise – in the 1990s after a spate of tree clearing.

Suitable for: Detectorists fans. The Derrynaflan Chalice was found nearby.

Make the most of Wicklow’s beautiful coastal paths starting with the 7km cliff path from Bray Head to Greystones. It will be like Grafton Street over the holiday period so the trick is, after a restorative quinoa coffee, to leave the hoards behind and head on off down the Murrough. This 15km coastal wetland path extends from Greystones to Wicklow town and, despite being an area of outstanding natural heritage, is almost always deserted. Even better, it’s flat. Finish up at the Wicklow Harbour where, if you’ve thought this through properly, one of you will have left a car.

Difficulty: Three mince pies if you do it all, two if you do the Murrough, one if you just do Bray to Greystones, wuss.

Suitable for: Birdwatchers, you’ll pass the East Coast Nature Reserve on your way.

High on nature at Ards

Can’t decide between a forest trail and a coastal walk? Ards Forest Park provides both. Located 5km north of Creeslough in Co Donegal, it has 480 hectares of varied terrain, from sand dunes and beaches to salt marshes and lakes as well as coniferous and deciduous woodlands. You’ve a choice of trails too, some of which, at 3km, are more akin to a stroll. Best to make the most of your visit with a trek along the Red Trail, the park’s longest at 13km, which combines flat coastal paths with hilly forests and fine seaside views.

Difficulty: Three mince pies, unless you take the short cuts.

Suitable for: History buffs; there are four ring forts, a holy well and a mass rock to look out for.

Shine on a Diamond

Do not be deceived by the length of the Diamond Hill loop. It may be just 7km but half of that is uphill and, despite the relaxed nomenclature, it is a proper mountain (442m). Located in the Connemara National Park, the path is made up of two looped trails which meet in the middle like a figure of eight. Stick to the lower one and it’s just 3km, or push on for the summit for a panoramic view of the Twelve Bens and Kylemore Abbey, before making your way back down through blanket bog.

Difficulty: Two and a half mince pies.

Suitable for: Weekends, the tea rooms are open Saturdays and Sundays over the Christmas period.

West Cork gets all the publicity – and the tourists – but East Cork has charm aplenty, not all of which begins and ends with food (think Ballymaloe and Midleton Farmers’ Market). For a 9km seaside stroll take the Cliff Walk from Ballycotton to the beach at Ballyandreen – and back. The trail is sandwiched between rich green pastures and the deep blue sea and offers gorgeous coastal views, and passes a lovely beach at Ballytrasna too.

Not suitable for: Buggy pushers, there are too many styles.

Break for the Barrow

Head out along the riverbank and tow paths between St Mullin’s and Graiguenamanagh. Part of the 100km Barrow Way long distance trail, this particularly picturesque 7km stretch offers the river beside you and the Blackstairs mountains and Mount Brandon overlooking you. Take time out to explore St Mullin’s 11th-century monastic ruins, motte and bailey and round tower stump. There is also a holy well that was the place to head to during the Black Death and is still held to have curative properties.

Enjoy a different kind of festive season with Westport’s 10th Annual Christmas Walking Festival. Hikes include Connaught’s highest mountain, Mweelrea, starting from Dadreen and taking the western approach, with spectacular views of Killary, the Bens, Maumturks and Inishbofin along the way. Next up is a leg of the Western Way from the Inagh Valley to Leenane, along Killary fjord. The festival runs from December 29th-31st, tickets €35-€60.

Paul Flynn: ‘I cook country food with style and I’m okay with that’
9